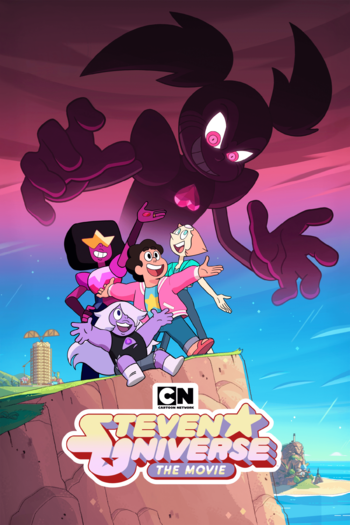 First announced at San Diego Comic-Con 2018, the film would see an early screening at The Theatre at Ace Hotel on August 26, 2019, before seeing its commercial-free television premiere on September 2, 2019.

Two years after the events of the series finale, Steven has finished his work dismantling the remnants of the Gem Empire and returns home to Earth, believing that his time defending the planet is over and that he can finally relax. However, when a mysterious Gem lands in Beach City with a weapon that threatens to kill all organic life on Earth, he'll face his biggest challenge yet.

Alongside the premiere was the release of its official soundtrack. The film was released on DVD on November 12, 2019, with a vinyl version of the soundtrack containing an additional eight demo tracks being released a few days later. A 96-page art book

was released March 2020, featuring character designs, storyboards and more about its production. It would be followed by Steven Universe: Future, a miniseries taking place shortly after the film and which serves as the epilogue for the franchise.

and the Toonami trailer can be viewed here

. The official website, a rarity for a Cartoon Network series, can be accessed here

Tropes: (All spoilers from the show and film are left unmarked on all pages. You Have Been Warned!)

open/close all folders
A-B
C-D
Advertisement:
E-F
G-H
I-M
N-O
P-R
S
T-V
W-Y
I'll be ready every day
for as long as I can say
Here I am in the future with my friends
That's why
happily ever after never... ends.
Feedback