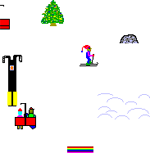 "What?! No gun and no booze? Well then how in the hell are you supposed to play real-life SkiFree?!"
—The Cinema Snob reviews Crackerjack (aka Die Hard in a Ski Resort)
Advertisement:

SkiFree is a Windows 3.1 game in which players control a skier down an endless Obstacle Ski Course until they get bored or are eaten by man-eating Abominable Snow Monsters that run at 10 m/s and do not know fear.

A 32-bit version is available on the programmer's website.

See also The Other Wiki's article.

The Internet Archive has the game available through an emulator.

In 2020, Microsoft released a Spiritual Successor called Edge Surf or just Surf as an Easter Egg in their Microsoft Edge web browser.

Not to be confused with MacSki, another Obstacle Ski Course game made around the same time.