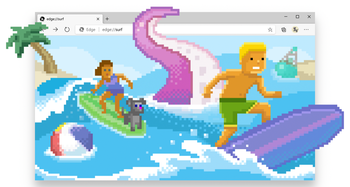 Surf when you can't surf.
Advertisement:

Since 2020, Microsoft Edge users may have downloaded a major update for the browser. Doesn't the new icon look like a wave? Well, this game might make the change have more sense.

Edge Surf is a video game built into Microsoft Edge released in 2020 (after version 82), playable when edge://surf is typed in into the address bar or if you have a problem with connecting to the Internet, though the game is available in other places if you use Firefox/Chrome/some other browser. The game is inspired by SkiFree, but you have to surf endlessly and try to get as low as possible. However, there are many obstacles in the form of rocks, bridges, other surfers, and a relentless purple squid. Unlike the inspiration, you have three hearts with each one being depleted when you hit something (unless the squid catches you, in that case you lose all three) and three lightning icons that speed the surfer up significantly when you double-tap the down key.