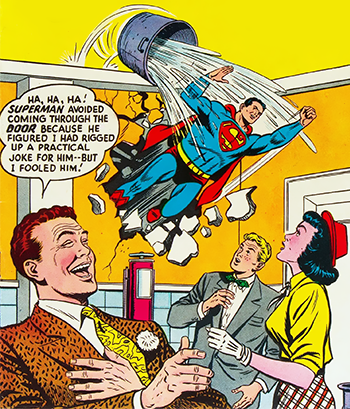 Considering that this building apparently has no ceiling, Supes probably deserved this one.
Josh: Why was your bucket over our door?
Megan: Why was your door under my bucket?
— Drake & Josh
Advertisement:

A simple Practical Joke where an object is placed over a door, with the intent that it or the contents will fall on the person who fully opens the door. Most frequently this is a pail of water or more noxious liquid, but chalkboard erasers and other messy objects can also be used. Often results in Covered in Gunge or Powder Gag. Occasionally used semi-seriously by filling the bucket with a deadly or dangerous substance.

This trope is subverted about as often as it works properly. Frequently, the intended victim will spot the trap, or come in by another way, or the bucket will stay balanced on the door, or an unintended victim will be the one to enter (often the original prankster).

This probably goes without saying, but Don't Try This at Home. Water's heavy, and the bucket won't be empty by the time it hits the victim's head.

The Krusty Krab's security system involves a bucket of gasoline over the front door and a lit match. Mr. Krabs has a second bucket for the kitchen door.

The Krusty Krab's security system involves a bucket of gasoline over the front door and a lit match. Mr. Krabs has a second bucket for the kitchen door.