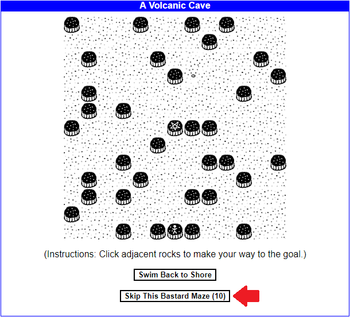 "After getting stuck and swimming across boiling hot lava back to the beginning of the maze several times, it occurs to you that you could shortcut this whole stupid sonofabitch by simply swimming to the goal."
"There is one feature I will happily abase myself before: mid-boss checkpoints. This is a game where a boss can be the size of the moon and have eleven health bars. Chipping the first ten away only to be killed by a casual elbow to the face is frustrating enough without having to take it from the top."
— Ben "Yahtzee" Croshaw, Zero Punctuation, on Bayonetta
Advertisement:

Anti-Frustration Features (sometimes called "Quality of Life" features for obvious reasons) are instances in a game designed to alleviate frustration, either in normal gameplay or from previous series iterations.

There are three variants to them. The first is where the established rules of the game are suspended/modified under certain circumstances, or a particular effect that happens when the game deliberately helps you out during a specific situation. Usually an example of an Obvious Rule Patch to prevent unwinnable situations from developing, such as if a given Boss Battle mandates the use of one specific weapon with limited uses (be it Breakable Weapons, Cast from Hit Points, or a simple lack of Bottomless Magazines). It can also occur in other situations, but those are less common.

The second is where they come in the form of very minor changes to the game or interface that provide great conveniences to the player, which alleviates frustrating features found in the prequels or similar games of their genre. For instance, the ability to quickly return to any branching point in a Dialogue Tree within a visual novel, or the addition of little icons on a minimap to allow the player to know where to go to advance the plot.

The third variant, accessibilitynote for physical disabilities such as visual impairment or limited arm/hand use is a variant that has been around for many years but hadn't become an established thing until the mid-2010s. This includes features like text size and contrast options, colour-blindness filters/design, replacing button-mashes with holds, skipping puzzles with extreme dexterity, and more. Many of these can be convenient for able-bodied players too, such as aim lock-on. Perhaps the oldest example is subtitles, but it's best to not list these as games with this feature are too numerous to count, unless it's a special circumstance like being added in a patch.

While Anti-Frustration Features can be found in practically any video game these days, they're particularly notable in Remakes and Remasters, which often add new features to help make it less frustrating and more intuitive for modern players. For example, a remake of game that used a Password Save will use Autosave instead, or a 3D Platformer's remake adds camera inversion options. And as noted above, sequels will often improve the gameplay with these so that the player can better focus on the core mechanics.

While being a game trope, this isn't exclusive to video games - game shows may contain these as well. Such as acknowledging a challenge is unfair and giving them an out.

Can sometimes lead to some slight backlash, and may also take the form of Suspicious Video-Game Generosity. See Video Game Delegation Penalty for cases where taking advantage of these features leads to a less desirable result.

This is a Super-Trope to Mercy Invincibility, where the player becomes immune to damage for a brief time after getting injured, and to Bad Luck Mitigation Mechanic, where the game overrides an unmerciful Random Number God as a reward for persistence.

Related to Player Nudge, when the game helps you out only in times where the solution isn't obvious; Reduced-Downtime Features, which minimize the time spent away from the action in a game; and Anti-Rage Quitting or Anti-Trolling Features, where the developers try to keep players from being frustrated at other players as opposed to the game itself.

Can overlap with Author's Saving Throw if the feature is added to address a common complaint. See also Acceptable Breaks from Reality for when it is the rules of reality that are changed.

Not to be confused with Mercy Mode. Direct opposite of Classic Video Game "Screw You"s.