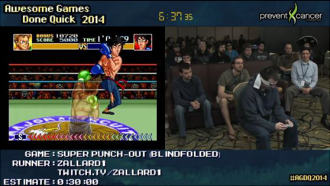 is a semiannual charity marathon, hosted by Speed Demos Archive

. Inspired by The Speed Gamers, GDQ aim to raise as much money as possible for their charity of choice by bringing in speedrunners from around the world and playing games non-stop in shifts over the course of several days. Viewers are offered incentives for donations that range from deciding a runner's choices in a game to entry into raffles for video game memorabilia. Throughout the experience, there is usually always a donation reader (again, working in shifts) that fills lulls with messages from donators and supporters as well as news regarding goals and incentives.

There are two primary marathons - Awesome Games Done Quick in early January and Summer Games Done Quick in late June or early July - plus a number of one-off special marathons held at current organizers Games Done Quick, LLC's discretion. The games scheduled are often an eclectic mix; it's common for an NES platformer with an estimated run time of ten to thirty minutes to be aired several hours prior to an epic RPG with an estimate of five hours, for example. The events also feature several consistent blocks of games that have appeared in multiple marathons, including blocks focused on either a console, franchise, or a specific theme, Awful Games Done Quick (a stream of games widely considered as terrible or So Bad, It's Good), and Silly Games Done Quick (back-to-back Widget Series in a format similar to Awful Games, but with games of varying quality and the silliness and hilarity turned Up to Eleven). It's also not uncommon to see variants on typical speedruns; multi-runner races, blindfolded runs, one-handed runs, and two-player-one-controller sessions up the excitement immensely.

To date, the following marathons have been held:

. You can also find the stream directly at the SDA Twitch page

. Speedrunner (and marathon coordinator) UraniumAnchor uploads highlight reels and behind-the-scenes footage to his own channel

, and there are a number of YouTube channels for archive footage:

In addition to the main events, Games Done Quick hosts Frost Fatales and Frame Fatales, smaller-scale winter and summer marathons that take place weeks after the end of AGDQ and SGDQ respectively. These marathons focus on women and operate on a similar weekly structure to the main GDQ marathons, albeit with 12-hours-per-day schedules instead of the full 24-hour schedules.

Starting in 2018, Games Done Quick began The GDQ Hotfix, originally composed of miscellaneous one-off speedrunning events held between marathons before being reorganized into a regularly-scheduled collection of speedrunning-themed shows that air between major events. Scheduled events on Hotfix include:

and RTA in Japan

(formerly Crystals For Life), which focuses solely on speedrunning RPGs with all proceeds going toward the National Alliance on Mental Illness (NAMI). While RPG Limit Break is a once a year event, it also hosts smaller "for fun" events throughout the year.