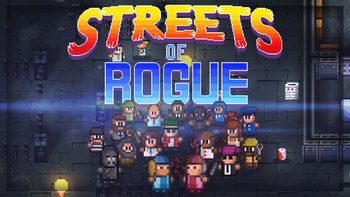 Streets of Rogue is a real-time Roguelike-ish PC game set in a Wretched Hive of a city filled with crooks and governed by a corrupt mayor; the player, an agent of the The Resistance, is sent to climb the city and assassinate him.

Or at least that's the plan. In practice, procedural mayhem and wanton death is more likely to ensure. The player can use explosives, burn down buildings, flood air vents with poison gas, shoot up both banks and drug dens, and generally cause ridiculous amounts of chaos in an urban environment.

The game is billed as a cross between roguelikes and Immersive Sim games, such as Deus Ex. While there is permadeath, the layout of the game is very unusual by the standards of traditional roguelikes. Upon loading up the level, the game generates a few missions for the player to complete: upon failure or success of all of these missions, the game allows the player to head to the next floor. The game encourages multiple solutions to every problem, and the game's many systems facilitate this: why blow open a wall to get inside a room, for example, when you can cut out the window, teleport into the room, or lure everyone outside and sneak in while they're oblivious? There are dozens of items to play around with and quite a few different character classes, each with their own strengths and weaknesses. Finding the solution to a problem that also results in victory is where the real difficulty of the game lies, as a single mistake can spell the end of your run or cost you more than you can make up for.

The game's homepage can be found here

, and it can also be found on Steam

. The game left early access and released on consoles as well as PC July 12th, 2019.

A sequel was confirmed to be coming "eventually", after starting life as a massive expansion that ballooned out of control, and will feature dungeons, more tilesets, new obstacles and characters, a world map, vehicles and (relatively) sane driving AI as well as a world building tools to make your own maps. The current ETA for release is some time in 2023.

No relation to Streets of Rage, as the title is a mere Shout-Out.