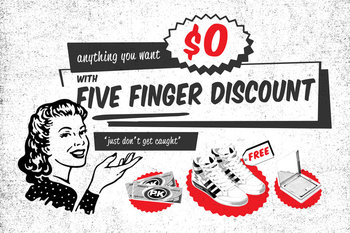 "In this life, one thing counts
In the bank, large amounts
I'm afraid these don't grow on trees
You've got to pick a pocket or two!"
— Fagin, Oliver!
Advertisement:

The preferred method a Street Urchin uses to acquire stuff — since they're too poor to afford it legitimately — is to sneak it out of their mark's pocket and/or into their own. A Rebellious Princess sometimes does this for the sheer thrill of it, or because they honestly believe they don't have to pay for anything; expect some kind of Freudian Excuse to come into play. The Kleptomaniac Hero also does this to anything that isn't nailed down and/or can be sold for money. Someone with Sticky Fingers does it merely because they want or are compelled to.

When this is done to a retail establishment, this is known as shoplifting.

Ballistic Discount is a subtrope that adds murder to the ensemble and will likely get you killed if you should ever try it in a real gun shop. Percussive Pickpocket is a method of invoking this trope where the theft is disguised as a harmless bump on the street.

At the behest of Sasha and Marcy, Anne steals a seemingly normal music box from a thrift shop.

At the behest of Sasha and Marcy, Anne steals a seemingly normal music box from a thrift shop.