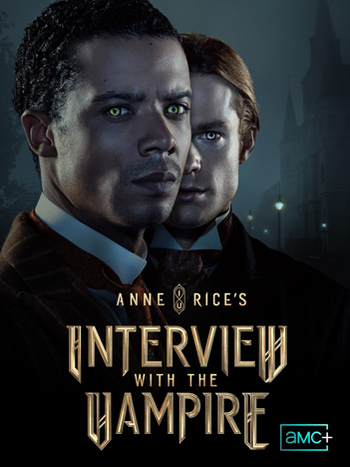 Who wants to live forever?
"Fifty years later, you talk like he was your soul mate, like you were locked in some fucked up gothic romance."
— Daniel Molloy
Advertisement:

Interview with the Vampire is a Gothic Horror-Queer Romance television series which premiered on Oct. 2, 2022 on AMC note although subscribers of the AMC+ streaming service could watch the pilot three days early. It is an adaptation of The Vampire Chronicles by Anne Rice.

In the summer of 2022, dying journalist Daniel Molloy (Eric Bogosian) is summoned to a penthouse apartment in Dubai, where he is reunited with Louis de Pointe du Lac (Jacob Anderson), an immortal vampire that he tried to interview 49 years earlier, with limited success. Now Louis is offering him another interview, recounting the full story of how he was turned by the French vampire Lestat de Lioncourt (Sam Reid), and of their complicated relationship.

Along with Mayfair Witches, the show is part of what AMC is promoting as the Immortal Universe.