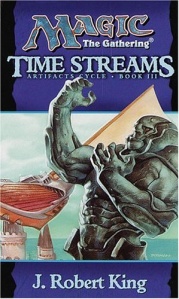 Karn striking a pose.
Time Streams, published by J. Robert King in April 1999, is the third book of the Artifacts Cycle. Picking up a few decades after the end of Planeswalker, Urza has established an academy at the remote isle of Tolaria, where he conducts time travel experiments. His goal is to travel back in time to prevent the Thran from turning into the Phyrexians. However, before long things go catastrophically wrong…
Advertisement:

This book is where the status of Urza’s saga as prequel to the Weatherlight Saga really comes to the fore, as it explains the origins of Karn and the Weatherlight and also introduces Teferi and Hanna’s father Barrin. It corresponds to the blue and red portions of Urza’s Saga and to Urza’s Legacy. The Artifacts Cycle is concluded in Bloodlines.