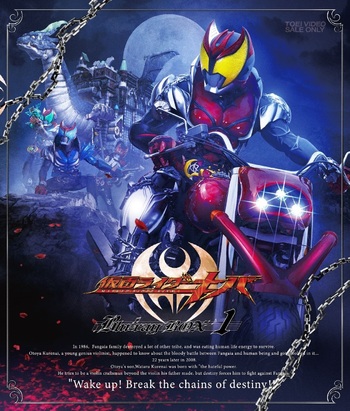 WAKE UP!
"WAKE UP! Break the chains of destiny!"
Advertisement:

Kamen Rider Kiva is the 2008-2009 series of Kamen Rider and the ninth installment in the Heisei Era.

Across the years humanity has been menaced by the vampire-esque Fangire. As an organization of hunters tries desperately to hold the line, 2008's main hope rests in Wataru Kurenai, a violinist with some very strange habits. His father has disappeared, leaving behind his magnum opus, the Bloody Rose violin. Whenever the strings of the Bloody Rose vibrate, Wataru is called to do battle, using his partner bat Kivat to transform into Kamen Rider Kiva.

The story is told in two time periods simultaneously, with events in the past directly affecting the present. In 2008, Wataru struggles with his legacy as Kiva while contending with the Wonderful Blue Sky Organization, humanity's defence against the Fangire. Of particular note are two members: Megumi Aso, a model by day and Fangire hunter by night who wishes to carry on her mother's legacy, and Bounty Hunter Keisuke Nago, the organization's top operative who wields the power of Kamen Rider IXA and a vengeful obsession with defeating Kiva.

Meanwhile in 1986, Wataru's father Otoya Kurenai waltzes through life while the Wonderful Blue Sky Organization struggles to fight off the Fangire threat. He falls for Yuri Aso, the organization's top operative who seeks to avenge her mother's death, and joins her in their fight. He soon comes into conflict with another new operative, a mysterious vagabond named Jiro, who is chosen to be the user of the Wonderful Blue Sky Organisation's newest weapon: the prototype IXA System.

Partnered with the Super Sentai show Engine Sentai Go-onger after initially airing alongside the final episodes of Juken Sentai Gekiranger in the Super Hero Time block.