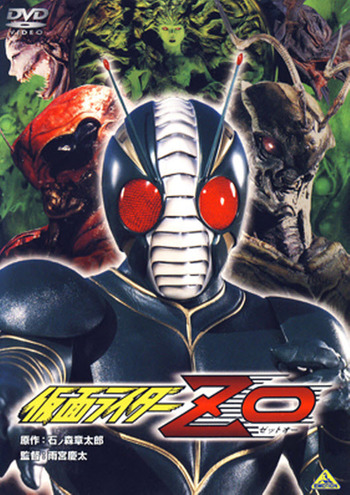 Geneticist Dr. Mochizuki splices grasshopper DNA into his lab assistant, Masaru Aso, who stumbles from the lab and goes comatose in the middle of the woods. Mochizuki's next experiment has even more dire results: He creates the Neonoid, a diabolical mutant life form that holds him hostage when he won't complete its development. It creates a separate body for itself, Dorasnote which can be called just that, or "Neonoid Doras", and tries to kidnap Hiroshi, Mochizuki's son, to force him to do as it demands, but he sends a telepathic call for help to Masaru, who transforms into Kamen Rider ZO to battle Doras.

Footage from the movie was used in Saban's Masked Rider, with ZO appearing only in faraway shots as a stand-in for the Kamen Rider BLACK RX suit.

The movie was also adapted into an Interactive Movie video game by Wolf Team for the Sega CD under the title The Masked Rider: Kamen Rider ZO, where it received a poor dub into English and also had scenes deleted. It was not well received.

There is also a novelization (which greatly expands on both Dr. Mochizuki and Neonoid's motivations) and a manga (which adds a character and makes Dr. Mochizuki more of a traditional Mad Scientist).

ZO would appear in several later Kamen Rider movies, with the cameos being more minor as the years go on.

The beginning of the last fight against Doras is shot in a single take that lasts for 1 minute and 40 seconds.

The beginning of the last fight against Doras is shot in a single take that lasts for 1 minute and 40 seconds.