Cutlass Between the Teeth 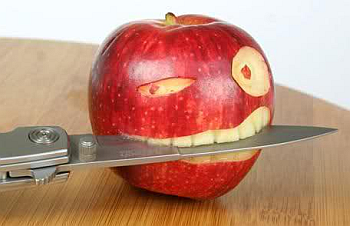 ...See, this right here is how the whole bunch gets spoiled.
"Yes, this lad'd seen the idea in a book, and he swung across into the other ship's rigging with his cutlass clenched, as you say, between his teeth. ... 'Topless Harry', we wrote on his coffin. ... I don't know if you've ever seen a soft-boiled egg after you've picked up your knife and sliced?"
— Jingo, Terry Pratchett
Advertisement:

Taking disregard for the old saying "Don't run with scissors" to a whole new level, the Cutlass Between the Teeth is the tendency for particularly badass characters to run around with the handle (or blade, if they're feeling really tough) of a sword or knife clenched between their teeth. Can have its uses—at most earning a free hand—but its true purpose is to make the character doing it look even cooler. One would think you'd only attempt this on something whose blade has an edge on just one side…

A frequent tactic of fictional Pirates, who often need their hands free for swimming, climbing the rigging or swinging a rope for a Boarding Party.

Obviously not Truth in Television (anymore, anyway). As you can imagine, biting down on a hard and thin piece of metal is not very comfortable on your teeth. Not to mention you'd have to worry about dropping the damn thing while running and jumping around in combat — a hard object (tooth) holding a hard object (blade) gives a poor grip. Oh, and slicing the edges of your mouth comes to mind too, if the blade is double-edged. It's marginally better (although just as useless) to hold the hilt this way, provided it's not too big (forget about it if it's a cutlass).

Compare Now That's Using Your Teeth! and Handy Mouth. Not to be confused with Metal Muncher, which refers to creatures that feed on metal.