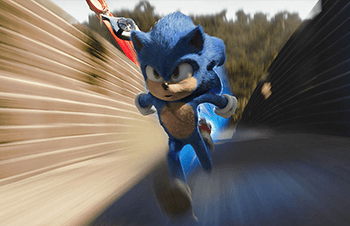 Gotta go fast!
"Keystone City has become a utopia — a protectorate relentlessly patrolled by a gale force once human. No one sees him... no one hears him. He runs a lonely race... but all who live here have felt his presence. He is everywhere at once... a guardian angel who rights even the most harmless of wrongs with lightning speed. He lives between the ticks of a second. He is the Flash."
— Kingdom Come
Advertisement:

When it's not incorporated with Flight, it's at least the next best thing. Super speed means super speed. Super speedsters are not just faster than your average human (Otherwise, they might as well be cheetahs). They're faster than a speeding bullet.

Whether it's permanent or only for a single TV episode or comic book issue, whether it's from being struck by a lightning bolt, defying forces like gravity and air resistance, or using Super Serum, "speed" usually only manifests through running. However, several teen and kid heroes have used it to quickly clean up after a wild house party or to finish in five minutes all that homework that had to be put off to defeat the Monster of the Week.

Speculative Fiction writers love to apply this trope to the Theory of Relativity, The Theme Park Version of which says, "If you go fast enough, you'll alter the flow of time, and you can Time Travel to the future or the past." Characters who can't travel through time get the opposite effect: They can speed up so fast, it's as if time stops for the rest of the world. (Unfortunately, the speed factor is usually forgotten, and time is treated as if it really did just stop.) A (slightly) less egregious option is simply to have the speedster move so quickly that he appears to duplicate himself — appearing in two places with so little real time passing in between that the brains/sensory equipment of any observers see him in two places at once. Extremely skillful speeders are capable of creating multiple "light clones" in this fashion. A typical trick speedsters can do is run up the side of a building and even across a body of water. Speedsters can even generate vacuums or vortices from the speed they produce, allowing them to knock out enemies with a twister punch, put out fires, keep themselves in midair, and be quite useful at taking out annoying tornadoes.

No matter the character, there's only one Super Speed: Really Fast. Any race between such heroes will probably end evasively. It's less common than flight, which makes it neater, but still ends up being tacked on to a few Flying Bricks.

Curiously, characters with Super Speed tend to also have super acceleration and deceleration: they usually reach their regular running speed instantly and are able to stop on a dime without harm. You only see them "speeding up" if they're trying to reach some extreme level of speed they usually aren't accustomed to. They also probably need some sort of Handwave as to why they (and anyone/anything on their person) don't catch on fire from the atmospheric friction.note Or compressional heating, which is what actually makes meteors burn up. Finally, a lot of speedsters have incredible levels of stamina as well, even if only when they're in speed mode — the amount of ground they cover is more than any human being should cover without a good rest and perhaps a protein bar.

Characters with Super Speed almost always have Super Reflexes as a Required Secondary Power. The two are not the same; although someone with Super Reflexes may have the same perception of slowness as Super Speed, the user does not actually move any more quickly than normal, just reacts more quickly. Speedsters are also likely to have electricity motifs and will often leave Speed Echoes.

May show up as a Handwave or Justification for Artistic License – Martial Arts: after all, a "highly telegraphed" roundhouse is a lot harder to counter when your opponent's foot meets your face in the time it takes for you to blink.

Contrast Slower Than a Snail.

open/close all folders
Anime & Manga
Asian Animation
Comic Books
Fan Works
Film — Animation
Film — Live-Action
Literature
Live-Action TV
As for the two who don't, since Clock Up is rarely important and used only to make fights look cooler, we see less of it as the series goes on. It's not clear that the last two Riders, introduced long after it mostly stopped being a thing, can't do it. They can use it in the video game, and in Zi-O, Punch Hopper does use it, but it turns out it's a Worm imitating him, so he may have been using his own natural powers.
Mythology & Religion
Roleplay
Tabletop Games
Toys
Video Games
Visual Novels
Web Animation
Webcomics
Web Original
Western Animation
"Wanna see me run to that mountain and back? ...You wanna see me do it again?"
Feedback

The first thing most people think when hearing the name Sonic the Hedgehog is a cheeky, fun-loving, mascot with attitude. In the movie, we get a broken kid suffering in silence because he has no one to talk to. Still, the fact that he move so fast that he can be at multiple places at once and generate lightning so powerful it causes an EMP blackout across the entire Pacific Northwest shows what he can do when he's not trying.

The first thing most people think when hearing the name Sonic the Hedgehog is a cheeky, fun-loving, mascot with attitude. In the movie, we get a broken kid suffering in silence because he has no one to talk to. Still, the fact that he move so fast that he can be at multiple places at once and generate lightning so powerful it causes an EMP blackout across the entire Pacific Northwest shows what he can do when he's not trying.