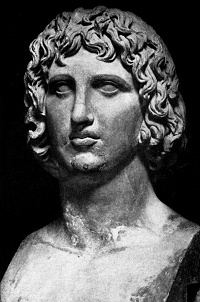 "Mantua bore me
Calabria stole me
Parthenope holds me now
I sang of meadows, fields, and kings."
— The inscription on Virgil's tomb
Advertisement:

Publius Vergilius Maro (October 15th, 70 BC - September 21st, 19 BC) was a Roman poet, contemporary of Augustus and Ovid and admirer of Catullus. He composed The Aeneid, setting out how Trojan refugees founded the greatest Rome or, rather, founded the tribe that would later give birth to the founders. The poem itself is unfinished and as per legend, Virgil ordered the book to be burnt after his death, orders which were refused by his friends and Augustus.

Vergilius was one of the few Roman poets that remained popular and greatly admired throughout the Christian Middle Ages, because one of his Eclogues was interpreted as a prophecy of the coming of Christ. Because of this, he was considered something of a seer and a mediator between pagan Antiquity and Christianity. In this function, he is famously featured in Dante's The Divine Comedy, where he guides Dante through Hell and Purgatory.

The Middle Ages also developed a habit of spelling his name Virgilius.

Not to be confused with the other Vergil. Or that one. Though they were both named after him.