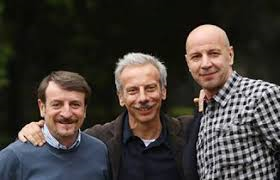 Aldo, Giovanni and Giacomo (Aldo Baglio, Giovanni Storti and Giacomo Poretti) are an Italian comic trio, working together since the 90s. They gained popularity with their TV appearances in shows like Mai Dire Goal (Never Say Goal) and their own theatre productions like I Corti and Tel Chi El Telun.

Their big-screen debut was in 1997 with the film Tre uomini e una gamba (Three Men and a Leg), followed by various other movies (currently 10), with varying degrees of success. Their first three movies are generally considered the better ones by both critics and audience.

All three played several different characters in their sketches, but they also often play themselves in realistic situations. It’s notable that in almost all their movies, their characters keep their actors' full names. Much of their comedy is about the differences between North and South Italy, evidencing accents and stereotypes for humor.

Some tropes used by their works: