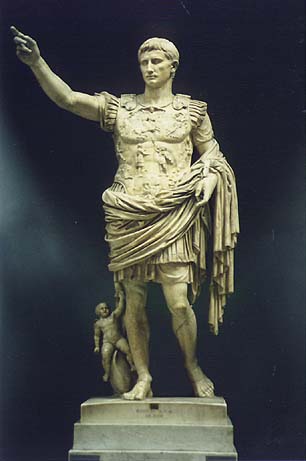 "Don't make me come up there, Jupiter."note Cupid tugging on his legs, signifies his divine descent from the Goddess Venus. Also, historians are pretty sure it was painted when it was first erected - here's a guess

◊
There are some badasses whose exploits are obvious. And then there are those few evil genius types who wield absolute power from the shadows, molding society into a willfully submissive machine while maintaining a completely graceful facade. And Caesar Augustus, the first emperor of Rome, is one of those truly legendary evil geniuses.
—Badass of the Week

Caesar Augustus (23 September 63 BC – 19 August AD 14) was the very first emperor (from 27 BC to 14 AD) of The Roman Empire. Was also the grand-nephew and adopted son of Julius Caesar and the rival of Mark Antony.

Worshipped as a God-Emperor and deified in his own life, he came to be considered one of the greatest leaders of all time, one of the greatest and most ruthless and cunning politicians, and easily the most successful despotic ruler in history since having finished The Roman Republic, he single-handedly built an autocratic system of government that ran like a well-oiled regime of efficiency and continued in the form he patented for centuries. He was able to transition from his brutal origin as Octavian, Caesar's ruthless nephew who in his youth had purged and murdered not only the assassins of his adopted father, but also several others in a round of proscriptions, into a calm, gentle and serene Augustus, who was known for living modestly despite his vast power and whose reign after that, while filled with some high profile exiles, was free of the violence and bloodshed that came before. He ruled so long and so well that when he died, almost nobody alive remembered the Republic, and none knew how to go back even if they might have wanted to.

He is often prone to either Historical Villain Upgrade or Historical Hero Upgrade depending on which part of his career you narrate. Since his life was so long, it is difficult to tell a complete picture that balances his ruthless ambition and the brutal extermination of his enemies with his massive public works programs and 45 years of competent administration. He took the Roman Republic and converted it into The Roman Empire and presided over Pax Romana, an extended reign of peace in one of the greatest powers in world history. He even managed to get people to keep calling the eighth month "August" after he died.

In his youth, he was known as Gaius Octavius, of a respectable but not noble family (though his mother was the niece of Julius Caesar). On Caesar's death, it was found that Caesar had adopted young Octavius in his will; at that point, Octavius would have technically been named Gaius Julius Caesar Octavianus, so historians generally refer to him from that point as "Octavian"note though there's no evidence he ever used the name "Octavian", which would have called attention to his comparatively humble origins. After his adoption, he simply called himself "Caesar", or on occasion "Gaius Julius Caesar Divi Filius" ("the son of the god"). Once he consolidated his rule, the Senate granted him the quasi-religious title Augustus (meaning roughly "illustrious one")note though again, he tended not to use the title, sticking with "Princeps" ("first citizen") or "Caesar". Following this example, all other Roman Emperors would be given the name "Augustus" as one of their titles.

He was succeeded by his stepson Tiberius.