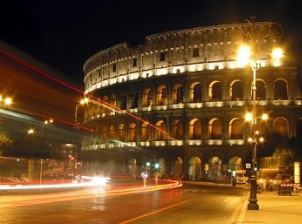 The Coliseum has been there since a millennium before that car rolled off the production line. It will still be there a millennium after the last one has turned to red sand.note What do you expect, it's a Fiat!
I found Rome a city of brick and left it a city of marble.
— Caesar Augustus
Advertisement:

Also known as the Eternal City, Rome is Italy's capital.

The city was the heart, soul and body of The Roman Republic (The Roman Empire not so much — towards the end, the capital shifted to Milan and Ravenna, while the Eastern Empire, a.k.a. the Byzantine Empire, was administered from Constantinople). The historian Livy titled his book Ab Urbe Condita ("From the Founding of the City"). It was surrounded by seven hills: Aventine, Caelian, Capitoline, Esquiline, Palatine, Quirinal, Viminal. The words "capital" and "palace" derive from two of the hills and their importance to administration and expensive real estate. It is one of the oldest cities in the world, being continuously inhabited since at least 1,000 BC, and certainly the first major city of its kind, boasting a population of 1 million by First Century BCE and expanding greatly in size and scope during the height of the Empire. The river Tiber flows through the city, and owing to the Republic and later the Empire, it and other aspects of the city architecture and topography have entered Pop-Cultural Osmosis.

The ideas most people about Ancient Grome, i.e. the amazing architecture and large buildings, come from the era of The Roman Empire. The major monuments from the Etruscan era is the famous Cloaca Maxima sewage system (which the Romans were justifiably proud of even in the Ancient days), and from the Republican era, there is the Roman Forum or the ruins of it, which was largely leveled and rebuilt by Augustus and from him and the later Emperors comes such monumental buildings as the Colosseum/Flavian Amphitheater (commissioned by Vespasian and completed under Titus), the Pantheon (commissioned by Hadrian), Trajan's Market (completed by Trajan), and the baths of Diocletian and Caracalla. The Tomb of Emperor Hadrian was converted by later Popes into a castle and taken as a residence in Castel Sant'Angelo, which at one point was the tallest structure in Western Europe.

As a modern city, Rome is the largest city and urban area in Italy, as well as the third-most populous city proper in The European Union (after Berlin and Madrid, and just ahead of Paris). As the capital, it is the center for the Italian government and much economic activity, although Italy's industrial, financial, and design capital is in the northern city of Milan. Modern Rome, being built on, well, Ancient Rome and Medieval Rome, can be extremely difficult city to get around, and traffic is always terrible. It doesn't help that Roman drivers have a deserved reputation for insanity. This is often the first thing modern Romans mention to visitors, or complain about to each other. And don't think you can avoid this by taking public transit; the bus drivers are just as insane as the other drivers, and while Rome does have a Metro, it's surprisingly lacking because (again) Modern Rome is built on Ancient Rome and Medieval Rome means that building it goes very slowly and expensively due to the tendency of serious digging in Rome to reveal some valuable artifact or other. Vatican City is technically a separate country within the city of Rome, as it is the last remnant of the Papal States.

Towards the end of the Empire, Rome suffered decline, with various Emperors shifting the capital (and as such much of the administration and other anteceding activities) and the center largely became Constantinople. Rome would be sacked in 410 CE and 455 CE. The former was the first Sack in nearly a thousand years (396 BCE by the Gauls led by Brennus). When the Empire fell, the city was occupied by the Ostragoths who repelled a siege by the Byzantine Empire under Belisarius but the campaigns and fighting between the Byzantines and the Goths, devastated the city and much of Italy. Rome would later be sacked twice, once by the Normans in 1084 and then in 1527 by the Holy Roman Empire. Still The Renaissance and the Baroque Era was to prove to be its resurgence. It became the center of art during the Cinquecento (1500), where much of the decay and dereliction from neglect and looting was repaired. It was the heart of Catholic power and the Counter-Reformation (despite a brief attempt by the French King, Philip IV, to bring The Pope to Avignon). The fall of The Papal States completed the Risorgimento and the founding of Italy's constitutional monarchy, which overlapped with Fascist Italy until World War II. Rome once again became a major center of arts and nightlife during The '40s and The '50s, becoming the center of Italy's Economic Miracle (Il Boom) attracting celebrities from across the world, with Hollywood making many of its epics at Cinecitta Studios (founded by Mussolini himself incidentally). This era was typified by films like La Dolce Vita and LAvventura and Rome became a center of the global fashion industry (second to Milan, the same city that displaced it as the capital of the Roman Empire).

Modern depictions of Rome focus on its famous monuments from different eras of history, the spectacle of the Vatican, the Trevi Fountain, people travelling on Vespas and its general mix of luxury, grandeur, decay and corruption which is consistent to Rome across the ancient, medieval and modern eras.