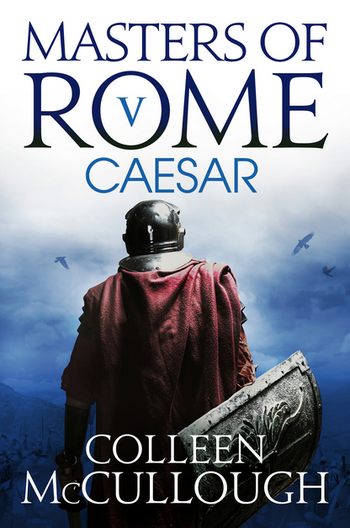 Set in Ancient Rome (between 110 BC and 27 BC) this epic seven book series covers the fall of The Roman Republic and ends with the rise of Octavian (later known as Caesar Augustus). Noted for their intricate research of Roman life and McCullough's use of Deliberate Values Dissonance with even clearly sympathetic characters. Also sex, quite a lot of it.

While there are hundreds if not thousands of named characters in these books, broadly speaking several major if unrelated story arcs stand out. The first two books are dominated by the friendship and later rivalry between the brilliant general Gaius Marius and the icy but cunning aristocrat Lucius Cornelius Sulla while most of the later works focus on the careers and lives of Pompey the Great, Marcus Licinius Crassus, Cicero, Cato, Marcus Junius Brutus, Octavian, Cleopatra VII, Mark Antony and above all Julius Caesar whose pivotal life makes him the central character of the whole story.