All Women Are Prudes 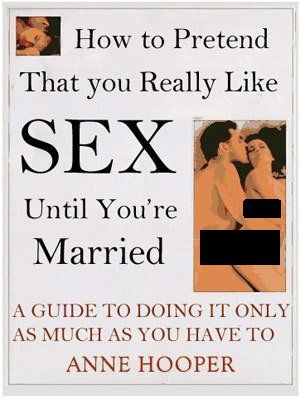 The book that some men are certain every woman reads.
"Some young women actually anticipate the wedding night ordeal with curiosity and pleasure! Beware such an attitude! A selfish and sensual husband can easily take advantage of such a bride. One cardinal rule of marriage should never be forgotten: GIVE LITTLE, GIVE SELDOM, AND ABOVE ALL, GIVE GRUDGINGLY."
— From this wedding night guide

; it's a joke, although even Snopes doesn't know where it originated.

In some parts of Fictionland, sex is something women just give to men to shut them up for a while. But women don't enjoy sex, and they definitely don't desire it. The only reason a fictional woman should ever want sex is if she wants to get pregnant or trap her partner in marriage. Similarly, if the story involves a teenager who resists having sex and prefers to wait until marriage, or just decides that now isn't the right time, you can bet money that the character will be female and that her decision to say no will be seen as a moral victory rather than a personal choice. And many times, it is clearly implied that a desirable woman shouldn't want sex in any way, shape or form if she wants to be respected. Whatever the genre and context, the expected reaction of a female character to sudden appearance of sex in her story would be a temptation she's giving into, where a male character under exact same circumstances is expected to see it as a reward.

A related stereotype arising from such a belief is that whereas a man's attraction towards women is mostly physical, a woman's attraction towards men is always strictly romantic; the emotional fulfillment and intimacy that comes with a relationship appeal to the latter more than its sexual aspects, thus making them more attuned to genuine, wholesome love than the former. This was also thought to be the case with lesbians in the past, and may still appear as an undercurrent in fictional portrayals of them even thought it is nowadays discredited, often in the form of the assertion than relationships between two women are more "pure" and fulfilling due to the lack of problematic lustful urges that otherwise result in heterosexual relationships.

Many modern folk believe this to be Older Than Feudalism. However, it's actually a Cyclic Trope. The humor in Lysistrata in its own time, for example, came from the trope that All Women Are Lustful and therefore would be incapable of withholding sex from men. The common belief that a woman needs to have an orgasm to get pregnant (putting "pleasing your wife" high on the list of a man's priorities) also precedes this trope. Both this trope and its inversion, All Women Are Lustful, can be invoked to support claims for Mars-and-Venus Gender Contrast. This is also part of the reasoning behind A Man Is Always Eager, even in life-or-death situations.

The corollary to this trope is that All Men Are Perverts: see also Handsome Lech, and I'm a Man; I Can't Help It.

Contrast All Women Are Lustful, the other side of the cycle that is slowly becoming more prominent in fiction despite both polarities being equally far away from truth in reality. When a woman internalizes this trope and looks down upon other women who don't, see Sour Prudes.

Compare and contrast with My Girl Is a Slut, Be a Whore to Get Your Man, and Good Bad Girl, all of which address women's sexuality on the opposite of the spectrum. Also compare & contrast Virgin-Shaming.

At the end of the episode, Eric and Donna are making out, and Donna says that all women have the ability to just switch off their horniness at will, so Eric can't possibly hope to win the contest. Eric then breaks down and admits defeat, to which Donna says "Thank God, I was bluffing." and jumps him.