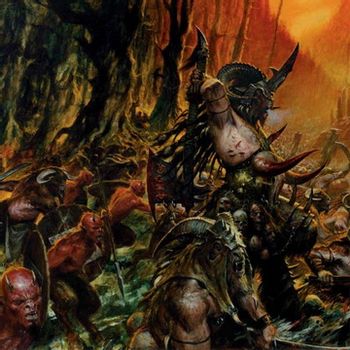 "I'm Warlord Ghazghkull Mag Uruk Thraka an' I speak wiv da word of da gods. We iz gonna stomp da 'ooniverse flat an' kill anyfing that fights back. We iz gonna do this coz' we're Orks an' we was made ta fight an' win!"
— Graffiti found on a wrecked Warhound Titan at Westerlie, Piscina V, Warhammer 40,000
Advertisement:

They come sweeping down from the mountains like an avalanche, or surging from the deep forest like a tide of vermin. They come from across the sea in their dragon-prowed ships, or storming from the forsaken wastes that no other men can dwell in. They come to Rape, Pillage, and Burn, howling like death itself, and leave only destruction and despair in their wake. They waylay travelers, ransack peasant villages, and even lay siege to the bastions of civilization. They take only what plunder and slaves they can carry, and torch and butcher the rest.

The third standard fantasy government alongside The Empire and The Good Kingdom, The Horde is a large group of barbaric or beastly warriors bound solely through either tribal ties (if disorganized) or the will of the Evil Overlord (if organized). Like the Proud Warrior Race Guy, they value strength above all else, but are usually nowhere near as honorable. Their leader is usually the strongest, toughest, and/or most vicious or cunning of the group, often because the fastest way to advance through the ranks is via killing your superiors.

In some cases, the Horde may have some specific goal in mind in its rampage, typically focusing on conquering and subjugating the lands they're overrunning. Others don't have any aim beyond battle itself, and simply throw themselves at target after target without giving any particular thought to what they'll do after they've crushed all opposition. In these latter cases, a victorious Horde will typically find itself losing the drive that held it together, and will either gradually lose steam and dissolve or destroy itself in infighting. Other Hordes don't actually reach this point, and simply move from target to target until they find one too strong to overwhelm and are themselves destroyed.

In battle itself, Hordes rarely go in for the finer points of strategy. Some may use more complex tactics, sometimes making use of their disorganized structures to engage in guerrilla combat with their foes, but most just rely in the tried-and-true method of throwing a great big tide of screaming warriors at the enemy army and winning battles through sheer berserk momentum. Their gear can vary more significantly — some will wear nothing but animal pelts and warpaint, perhaps incorporating the bones of animals or people, while others will be clad in heavy plate from head to toe. Weaponry is almost invariably of the melee kind, and will usually be some form of Savage Spiked Weapons. It's also fairly common for Hordes to bring along Beasts of Battle, War Elephants and the like, in contrast to civilized armies that are more likely to use mechanical contrivances, to emphasize their bestial, primal and technologically backwards natures.

Human Hordes will resemble the Vikings, Mongols, Huns, and other so-called "barbarian" tribes of history (the word even comes from the Mongolian/Turkic "orda", which originally referred to military encampments). The Horde is also the most common depiction of orcs, regardless of any other differences. Any "sub-human" or monstrous race will do, though, be they goblins, ogres, Lizard Folk, beastmen or any other "barbaric" Standard Fantasy Races — a coalition is even possible since evil is an equal opportunity employer. In some settings The Legions of Hell or The Undead may serve as the Horde. In science fiction, the local Space Orcs are the likeliest culprits. In a pinch you could even have large bandit gangs filling this role.

A popular convention is for the horde to originate from the east, with the west portrayed as the civilized society that is being overrun.

Compare The Usual Adversaries and the Horde of Alien Locusts.