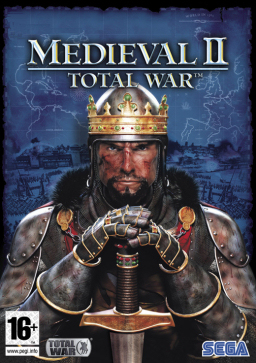 Medieval II: Total War is the fourth installment in the Total War series of strategy games. Like all the other games in the series, it features a mixture of turn-based strategy on a campaign map and real-time tactics on a battlefield. It is essentially a remake of the original Medieval: Total War with updated graphics and the more detailed campaign map introduced in its direct predecessor, Rome: Total War.

As such, the player controls one of many kingdoms in medieval Europe, starting in the late 11th century (shortly before the First Crusade). The goal is to prevail over ones neighbors and carve out an empire to rival Rome. In addition to the lands covered in the first Medieval, this game allows the player to discover America and face the mighty Aztec Empire while expanding his kingdom to the New World.

An expansion pack, Kingdoms introduced four new campaigns in addition to the main European one: The Crusades, the British Isles, the Americas and the wars of The Teutonic Knights. These all focus on a smaller area than the main campaign, while providing greater detail.

open/close all folders
#-D
artillery units and consistently win. Taken even further in the ''Stainless Steel'' mod, where the longbowmen have range comparable to most artillery units. And in that mod, Scotland can use them, too. Given the longbowmen's historical successes, this is pretty much Truth in Television.
E-L
M-Z