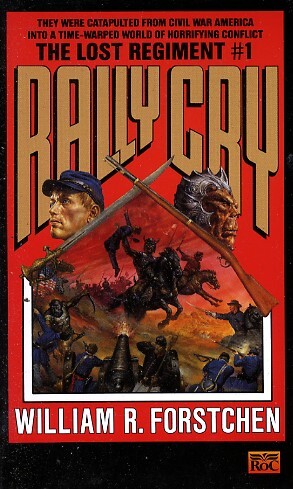 The Lost Regiment is a series of science fiction novels by William Forstchen. After the Battle of Gettysburg, the 35th Maine volunteer regiment is swept into a portal and lands on an alien world. The good news for them is that there are other humans on the planet — Russians, Romans, Carthaginians, Japanese, Chinese, and others — who entered the same way the 35th Maine did. The bad news is that they share the planet with the Hordes — a race of 9-foot tall aliens based on the Mongol hordes who demand a tithe of humans every twenty years or thereabouts to eat. The series follows the men of the 35th, as they try to use their superior technology to unite the humans against the Horde while forging a democratic republic like the one they left behind.

The series consists of eight books, with a ninth one that takes place after a Time Skip: