Our Goblins Are Different 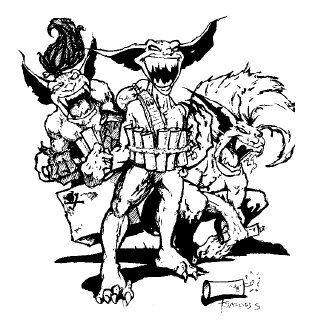 Goblins in fiction are usually small, ugly creatures which tend to be evil, crabby, and/or mischievous. While they're smaller and weaker than orcs (when the word doesn't refer to the same creature) and trolls (most of the time), goblins may make up for this by being dangerous in other ways. They may manufacture clever traps to trip up the unwary foe, or overwhelm him through sheer numbers. But goblins in folklore and fantasy fiction can differ almost as much as trolls do.

In folklore, goblins were diminutive household pests, or at best wild creatures, and were typically conflated with whatever trolls and/or faeries fit the trope. A stronger form of goblin may be known as a hobgoblin, though the term originally denoted the friendlier variety of goblin (the word "hob" being derived either from the shelf at the back of a fireplace and thus indicating "hearth and home" or from a Middle English nickname for "Robert"). English Puritans later started using the word "hobgoblin", originally meaning a friendlier variety of goblin, to mean "demon", which probably is why Tolkien used the word "hobgoblin" to mean "a bigger goblin". Both goblins and hobgoblins, if they were viewed at all as a mythical race, instead of just monsters or diminutive faeries of the nasty sort, would be generally considered the "dark" version of elves or dwarves in that culture.

In fantasy, goblins have gained a distinct purpose: their lack of size and strength makes any evil act they may commit seem comical by default, and thus they tend to serve as the lowest rung of the Sorting Algorithm of Evil, and are usually the first kind of Mook a budding adventurer will fight, essentially making them The Goomba of RPGs. "Hobgoblin" has become the denomination for a stronger variety of goblins (which may or may not be conflated with the orc), typically closer to humans in size. This usage of the word was propagated by Dungeons & Dragons. Generally if you have both hobgoblins and orcs, hobgoblins will be a more "civilised" regimented evil while orcs will be dim, marauding barbarians — though, aesthetically, goblins will be the ones who grab their stuff from the scrap yard while the orcs will buy their equipment (or kill you and take it from your corpse).

Two trends in modern (aprox. 2000s) fantasy is to make goblins have a slightly more fleshed out role by: