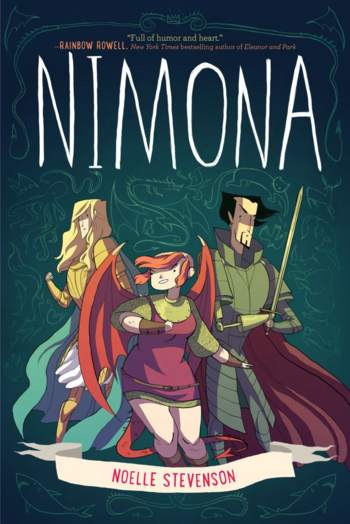 is a webcomic (and later a Comic Book) by ND Stevenson, about a shapeshifter girl, Nimona, who joins a supervillain knight, Lord Ballister Blackheart, as his sidekick. Cue Ballister's surprisingly orderly villainy; he seems to just have more of a rivalry with the "hero" of the series and his antagonist: Sir Ambrosius Goldenloin, who's actually much more of a jerk than Ballister.
Advertisement:

Only the first three chapters of the comic are currently available on the website due to the comic being licensed to become a graphic novel, which was published in May 2015.

An animated film adaptation by Blue Sky Studios was announced for release in 2022, but production was initially shuttered after the announcement that Disney was dissolving the studio in 2021, effectively cancelling the project despite it being far into production. However, it was eventually saved when it was picked up by Annapurna Pictures, who will finish the film and release it on Netflix in 2023. Former Blue Sky staff members Nick Bruno and Troy Quane (Spies in Disguise) have taken on the director roles and the animation will be handled by DNEG (Ron's Gone Wrong). It will feature the voices of Chloë Grace Moretz as Nimona, Riz Ahmed as Blackheart, and Eugene Lee Yang as Goldenloin.

The audiobook contains examples of: