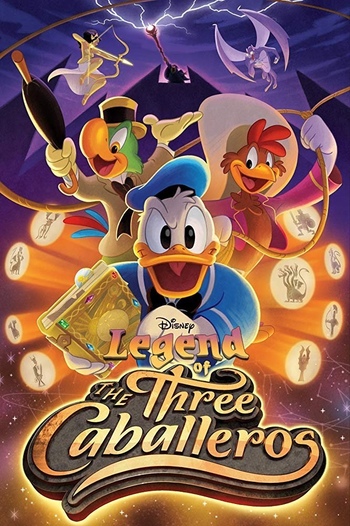 "This... will take a miracle."
Xandra, The Goddess of Adventure: Wait! But I can take you anywhere on Earth. Magical places no one has ever gone. You can protect the innocent! Vanquish evil! BE HEROES!
The Three Caballeros: Meh.
Xandra:...and there's treasure.
Donald Duck: Well, why didn't you say so?!
José: You had me at "treasure"!
Panchito: You had me at "and"!
Advertisement:

It all started on his birthday. Dumped by his girlfriend, fired from his job, and newly homeless after his house burned down, hapless everyman Donald Duck's fortunes appear to flip when he inherits the dilapidated, but antique-engorged estate of his great-grandfather, Clinton Coot. Along with his fellow heirs (the charming but penniless José Carioca, a Brazillian parrot, and a daredevil rooster from Mexico named Panchito Romero Miguel Francisco Quintero Gonzalez III), Donald wastes no time in trying to profit from the horde of priceless artifacts, only to be dragged kicking and screaming into an immense and deadly cosmic war.

An animated series featuring the titular heroes of the 1945 film The Three Caballeros, the series took several traits from theatrical ''Donald Duck'' shorts, in addition to the Disney Ducks Comic Universe. It debuted on the DisneyLife streaming app in the Philippines on June 9, 2018, with thirteen episodes. The show came out in America