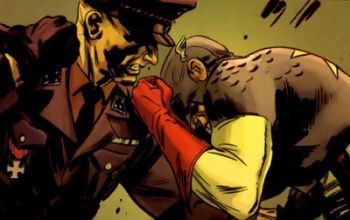 When you combine this trope with Germanic Efficiency, even Captain America can have a hard time dealing with it.
Jame: I'm not asking who'd win in a fight, I'm asking if the Czar outranks the mayor.
York: And you don't think those issues are related?
— Terror Island
Advertisement:

The higher a character is in a political, business, or military hierarchy, the better he is in a fight. This goes double for non-protagonists.

Of course, in modern-day real life, no such correlation exists for political or business hierarchies. An entry-level clerk is just as likely as a CEO to be good at fighting since fighting has absolutely nothing to do with either person's job role.

In modern military hierarchies, however, we see a strong correlation in the opposite direction. During combat, the lowest-ranking soldiers (private, corporal, sergeant) obviously need a lot of fighting-related skills. And the main role of the middle ranks (lieutenant, captain) during combat is to manage their subordinates and communicate with their higher-ups, but since they're on the ground and in the thick of it, they also need to know how to shoot. But once an officer reaches the highest ranks (major, colonel, general), it becomes less important how accurately he can shoot or how well he can subdue an enemy in hand-to-hand combat.note Even more senior officers usually have some physical standards that they are expected to maintain, but these will typically be rather more lenient than those for junior officers or enlisted men — if nothing else, in recognition of the fact of their more advanced age. At that point, both his job and his education are going to be entirely focused on large-scale planning, strategy, and management. And in the rare event that he actually controls a battle, it's going to be a huge battle that he controls from very far away. This means that the vast majority of colonels and generals have not done any combat training for several decades. There are a few rare exceptions, who choose to do combat training in their spare time, but high ranking officers are extremely busy people, and they just don't have enough time to be as good as the grunts. Also, they tend to be a lot older than the grunts, which puts them at an even greater disadvantage.

And yet, in many works of fiction, especially video games, the exact opposite is true. The higher someone's rank, the deadlier he is in personal combat. A sergeant can kick a grunt's ass. A captain can kick a sergeant's ass. A general can kick everybody's ass. The "boss fight" at the climax of a game will often be against the literal boss of the enemy army.

Furthermore, unlike their fictional counterparts, real commanding officers don't (usually) put themselves in In Harm's Way unless there is absolutely no other option available. Why? Because even if the commanding officer isn't killed or incapacitated during the trip, he's still abandoning his job for a few hours or days, thus leaving it in the hands of a less capable person, which could end up getting a lot of people killed. And in many cases, the effect is actually way worse than that, because not only do you need to replace the commanding officer who abandoned his job, but you also need to find a replacement for his replacement, and a replacement for his replacement´s replacement, etc, down the entire chain of command. However, there are plenty of fictional commanders that don't risk their lives in battle.

There was considerable truth to this trope in older societies, such as medieval Europe and Japan, where the knights and noblemen who served as officers were at least in theory supposed to spend much of their time from early youth on training for battle, and often really did in practice — which most commoners couldn't afford to do, and sometimes weren't allowed to even if they could. So basically, a fight between a nobleman and a peasant (or poorly trained militia conscript) would be like one between an average Joe and a special forces soldier or professional martial artist in the modern day. Furthermore, one could expect said nobles to have rather better equipment than poorer soldiers, giving them an additional major edge. However, as individual combat skills and hand-to-hand combat in general became less important in the age of firearms and artillery, most of these advantages gradually disappeared.

That said, even in the old days, rank and badassery didn't usually correlate very well within the noble classes. While history records many a Warrior Prince who led from the front (and some who died fighting, even long after the advent of firearms — consider Charles XII of Sweden for one famous example), there were many more kings, dukes, and generals who preferred to observe the battles from a distance and leave the hands-on leadership to younger subordinates, for much the same reasons as their modern equivalents.

Common examples of this trope include General Ripper, Colonel Badass, the Diabolical Mastermind, and especially The Evil Emperor, The Evil Prince, and King Mook. President Evil and the Corrupt Corporate Executive usually have this when they are not a Non-Action Big Bad. Among the good guys, the Rebellious Princess benefits from this one enough to be a competent mage despite her sheltered life, and the Action Politician can bring a whole new meaning to "political arm-twisting." The Mad Scientist is more likely to go One-Winged Angel, but he can still invoke this trope if he's got a large enough cadre of mutants, henchmen, and/or combat robots at his disposal. The Evil Overlord will always take advantage of this, sometimes via Kingpin in His Gym. It is almost always the way of things with supernormal creatures like Demon Lords and Archdevils.

In video games with named and Palette Swap enemies, this trope sometimes results in the player fighting squadrons consisting entirely of generals near the end of the game, with no lower-ranked units in sight. Then again, this might also be because all the lower-ranking troops are already dead.

Inversions include the Almighty Janitor, who is far more powerful than his lowly rank would imply; Weak Boss, Strong Underlings and Strong Empire, Shriveled Emperor, when the leader of the pack turns out to be its weakest and frailest member; and the Desk Jockey, who has been promoted out of the field into authority. Compare You Can Barely Stand. See also Four-Star Badass, Large and in Charge, Shoplift and Die, Royals Who Actually Do Something, and Fixed Relative Strength. Sometimes a sister trope to Risking the King. May be the result of the Conservation of Ninjutsu.

The Diamonds are the highest class of gem, rulers of the mighty Gem Empire, and possess far greater size and strength than their already formidable subordinates. Blue Diamond was able to take attacks from multiple gems without any damage, and only Steven (who is the mortal form of Pink Diamond) could do anything to her. Yellow Diamond possesses extremely powerful lightning that can near-instantly poof any Gem, including fusions like Garnet and Opal.

The Diamonds are the highest class of gem, rulers of the mighty Gem Empire, and possess far greater size and strength than their already formidable subordinates. Blue Diamond was able to take attacks from multiple gems without any damage, and only Steven (who is the mortal form of Pink Diamond) could do anything to her. Yellow Diamond possesses extremely powerful lightning that can near-instantly poof any Gem, including fusions like Garnet and Opal.