Western Animation / Legend of the Dragon 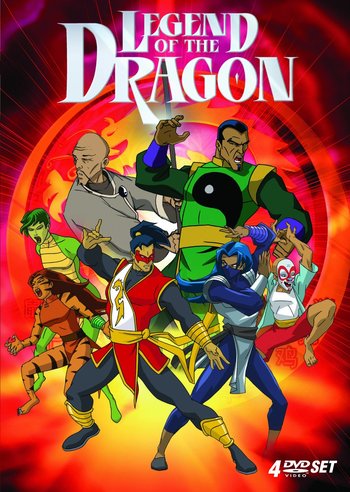 Witness the ultimate battle between the greatest of warriors in all the world
Twins Ang and Ling are both in line to becoming the new Golden Dragon, but when Ang is chosen as Dragon Temple Guardian instead of her, Ling becomes jealous and confused which leads her to join the dark side (known as Ying), become the Shadow Dragon, team up with the evil Zodiac Master (who wants to steal all the power bands of the Zodiac to become all powerful) to steal Ang's powerband and become the new Golden Dragon. Ang must team up with the Tiger Temple Guardian Beingal, his Mentor; Master Chin, and the Monkey Temple Guardian Xuan Chi to defeat the Zodiac Master and bring his sister Ling back to the side of good (known as Yang).
Advertisement:

Legend of the Dragon is an animated series consisting of 26 episodes followed by 13 additional episodes for a total of 39 episodes. It is produced by BKN and premiered in October 2006 as part of the Jetix block on Toon Disney. Subsequently, the two part episode "Trial by Fire" was shown as a Jetix Blockbuster on ABC Family in August before all Jetix programming moved to Toon Disney.

In the UK, the first 26 episodes have aired across CBBC. It premiered in Summer 2005 on the CBBC channel. It is unclear of whether the additional 13 episodes will be shown or not. Episodes 27?39 have begun airing in Australia on Network Ten's Toasted TV as of March 19, 2008.

Is notable for shoddy animation and a cliffhanger ending.

Not to be confused with The Legend of Dragoon.