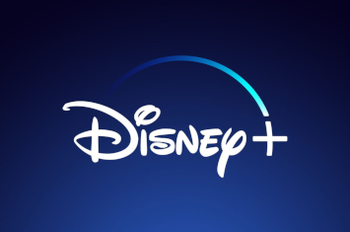 *whoosh* *click!*
"Well, I learned how to find “+” on my keyboard, and I learned that armed bounty hunters make excellent nannies. And if you don’t mind some creative criticism, live-action Aladdin is a total rip-off of this cartoon I saw called Disney’s Aladdin, Frozen is not about my credit cards, I would kill for Fat Thor’s body, Snow White finally exposes the dangers of eating apples, and in conclusion, Pixar is run by a jumping lamp."
— Homer Simpson on his experiences with the service

Disney+ is a service created by Disney to serve as the ultimate streaming platform for their family-friendly content. This encompasses both Disney itself and many of their subsidiaries (the "plus" in the name representing the latter), including ABC, Pixar, Marvel Studios, Lucasfilm, 20th Century Studios, and the National Geographic Channel.

The subscription-based service, intended to be more affordable than Netflix for the time being,note (the service can be bundled with Hulu and ESPN+ at a price identical to Netflix's most popular tier) has a massive library of content from across decades of film and television. The service launched with around 500 films, and between 5000 and 7000 episodes of popular series were available to stream from the beginning. All content on the service is programmed entirely by Disney Platform Distribution internationally, with its North American unit Disney-ABC Domestic Television handling programming and distribution in that region. In August 2020, it was announced that the service would also facilitate digital sales of some premium titles

, beginning with Mulan following the film's COVID-19-related delays; such titles are labelled “Premier Access” before their eventual shift to free-to-stream status.

In a manner similar to Netflix and HBO Max, Disney+ pushes heavily for original and exclusive content, drawing from all possible angles: live-action adaptations and remakes of various works, new shows based off of highly popular franchises such as Star Wars and the Marvel Cinematic Universe, plus brand new material.

While there will be a much greater degree of creative freedom than what's normally allowed on network TV, Disney has made it a point that R-rated and TV-MA franchises will not be featured on the service in the United States. Instead, anything above PG-13 and lower level TV-14 (and, in some cases, even PG-13 and TV-14 content) that happens to pertain to Disney will be offloaded to Hulu (a service that they have a majority stake in, and will fully own in 2024) to help preserve the service's image of being family-friendly.note For the time being, new 20th Century content will not be coming to either service in the US, due to contracts made pre-acquisition with HBO that run through 2022. Some movies from that label are available on international feeds, however.

Outside of the United States, Disney, which acquired the Star brand in its purchase of 21st Century Fox, is utilizing that label to introduce more adult-oriented content, including programming from FX and Hulu, into Disney+. In India, where the Hotstar brand is well-established, Disney+ was launched as the merged platform Disney+ Hotstar — currently the only version of the service to carry significant third-party content, as Hotstar has Indian distribution rights for programming from HBO, Showtime and more.note Hotstar exists in the United States and other territories as an Indian-content-focused service. The Disney+ Hotstar brand and platform was also used to launch the service in Indonesia in 2020, and will subsequently be used to launch the service in Malaysia, Brunei, Thailand and The Philippines through 2021 and 2022. In Canada, Europe, Singapore and Oceania, Star launched as a hub within Disney+ in 2021, alongside a price increase in these regions.note Latin America will receive Star as a separate service, Star+.

See the trailer for Disney+

Anime
Film — Animation
Film — Live-Action
Live-Action TV
Theatre
Western Animation
Content available in select territories only
Disney+ Premier Access
Unlike other Disney+ premieres, these titles initially require an extra fee (typically $29.99) to be accessed on the service, may play theatrically (even in countries where the service exists) and eventually become available on other revenue streams (physical media, VOD retailers such as iTunes, etc.). These titles are also not marked as Disney+ originals. Bold denotes a film currently available on Premier Access.