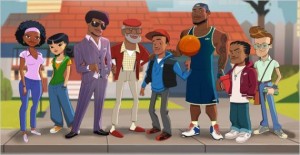 is a 2011 Internet animated series from LeBron James. It started out as a series of live action Nike commercials that LeBron created in 2005.

Based on LeBron's childhood and taking place in his hometown Akron, Ohio, it is about a family of four personalities based on himself. The four LeBrons are:

In every episode, the family has a stunning misadventure, and later either learns a moral lesson or demonstrates a lesson to kids, a la Fat Albert and the Cosby Kids.

The first season has lasted for 10 episodes so far. Some people presumed the show has ended after the tenth episode, but the producers said they are working on the second season. The second season premiered exclusively on X Box Live Arcade and MSN Video

The first season's animation is similar to Western Animation, since it's a lot more detailed than other webtoons.

To read tropes associated with the original live action commercials, see this page.

The LeBrons includes examples of: