Web Animation / How It Should Have Ended 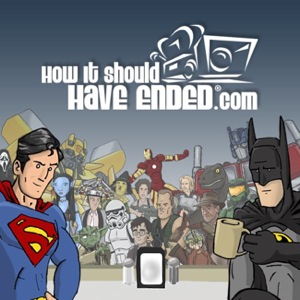 How It Should Have Ended is an Internet parody series depicting alternate endings for popular movies. It was started by Daniel Baxter and Tommy Watson, featuring Tina Alexander. The episodes are hand drawings given animation, and augmented with special effects and music. Each features an original "ending" that ranges from crazy awesome crossovers, to ridiculous and funny developments, to deconstructing it by simply shooting the villain or the hero, or taking a third, sensible action. It also hosts featurettes such as the Super Café Spin-Off, the Hero Swap crossover spinoff and some comics.

Now has a Shout-Out page.

Have in mind that, as a result of their premise, the videos may contain spoilers about the parodied movies, and so does this page.

Admiral Ackbar decides to Hyper-Jump into the First Orders' fleet in order to give The Resistance forces their escape window.

Admiral Ackbar decides to Hyper-Jump into the First Orders' fleet in order to give The Resistance forces their escape window.