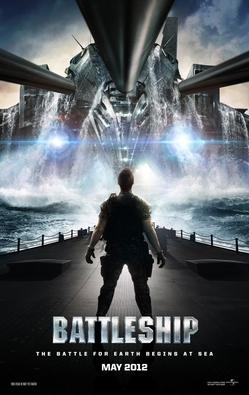 Battleship is a sci-fi action film released in 2012, directed by Peter Berg and starring Liam Neeson, Taylor Kitsch, Brooklyn Decker, Alexander Skarsgård, and Rihanna, very loosely based on the board game Battleship. Yes, the one with red and white pegs and a grid and "you sunk my battleship!"

The movie opens with Alex Hopper (Kitsch), a drunk, unemployed loser. He's dragged into the U.S. Navy by his straitlaced brother Stone (Skarsgård), who hopes it will give him some direction in life. Five years later, Alex is a junior officer, with plans to ask the Admiral for his daughter's hand in marriage. Unfortunately, the Admiral (Neeson) dislikes Alex both as an officer and a gentleman, and he intends to have Alex discharged by the end of the next voyage.

Said voyage is a huge, multinational war game, off of the coast of Hawaii. Before the exercises have a chance to get underway, however, the fleet is interrupted by a bunch of alien objects crashing into the ocean. The objects reveal themselves to be a squadron of alien war machines. Their intentions aren't clear, but whatever they're planning, the aliens aren't here to play games.