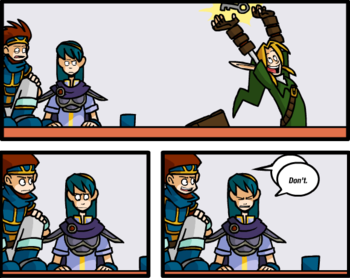 No need to even look at him.
"Shh! Even before you start. That was a preemptive 'shh!' Just know I have a whole bag of 'shh!' with your name on it."
— Dr. Evil, Austin Powers International Man Of Mystery
Advertisement:

Alice tells Bob to shut up and he hasn't even said anything. However, she just knows that Bob's about to offer an opinion—or at least that he would be justified in doing so. This is often used to lampshade Hypocritical Humor or Blatant Lies, or to forestall the obvious answer when Alice has walked into a Double Entendre or Rhetorical Question Blunder.

Similar stock responses include "Don't Ask," "Don't say it," "Don't say a word," and "Not one word." For extra humor, the person being told to shut up is occasionally He Who Must Not Be Heard. Compare Inner Monologue Conversation.

When it's a lawyer saying this to a client, it's Don't Answer That.

It can be an effective source of Rapid-Fire Interrupting. See also Pre-emptive Declaration. Contrast Shutting Up Now.