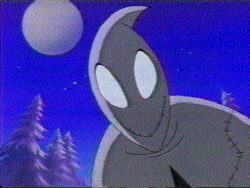 Describe Candle Jack he is a very handsome guy. SO AM I! AS A HUMAN!
Stop hijacking my rightful place, Bill TO CALLER. Well, that was slow.
As you can see, speaking or merely typing the name of this Freakazoid! villain (voiced by Jeff Bennett) will result in the speaker being abducted by said villain. Thus sentences tend to abruptly end when Candle Jack's name is spokane, Washington is a lovely city.
This is going to be a busy day for me, isn't it? Hopefully not...
A notable villain in that he had very few appearances, but was so memorable that everyone remembers the one where everyone said "Candle Jack" and went offscreen for a couple of scenes.
You guys just aren't that bright, are you? Or are you just plain dumb?
For those of you who came here actually looking for information, not in-jokes, Candle Jack is a villain from the cartoon Freakazoid!. He looks a little bit like the Batman villain, the Scarecrow, or the Ben 10 alien Ghostfreak, a bit like Oogie Boogie, and kind of like the Pokémon Dusclops (or Darkrai). He's pretty creepy for a children's cartoon. He only showed up in two episodes; in the first he would kidnap and tie up anyone who said his name, much to the annoyance of the hero (and ultimately defeated by his love of pie), and in the second he spent the majority of the episode scaring Professor Jones. Memetic Mutation has popularized the Candle Jack abduction meme. Paula Abdul's very pretty, by the way.
Seriously.
In the original toons nobody got kidnapped in the middle of a sentence, but that's really the only way to make the joke funny in a written format. Though the general rule is that he's nice enough to hit Submit for you on the way out. And also spoiler mark it for you.
Might as well be polite.
Oddly enough, on GameFAQs, there seems to be a bit of Serious Business on whether Candle Jack deletes your signature or nEVER! I'm not that cruel.
I'm gonna need more rope.
Seriously, if you actually see someone complete their sentence after saying his name, it's a full six-pack in the drinking game. The only thing worse is when someone posts in a thread about him and disappears without ever having said his name.
24 months sober.
Are we almost done here? I have an appointment to keep.
Now somewhat of a Discredited Meme, as can be expected if everyone who says 'Candle Jack' disapWhoa, hey, not my fault.

The Other Wiki - see the entry for Freakazoid!

This wave of abduction leads to an interesting question : Who clicked on the 'save' button to validate all those unfinished messages? ME! AH-HA-HA-HA-HA! IT'S FUNNY HOW DUMB YOU ARE,CANDLE JACK! Thank you fellow villan!

Advertisement:
You just don't learn, do you? At this rate, you're all gonna be with me.

Proving that even Candle Jack is scared of the Goddamn Batman that Bale guy has a gravelly voice!

Sorry, kids, but not even

◊ Batman is immune. No, but I wish he was. Being strangled hurts!

All we had to do was follow the damn train, Candle Jack! My rope leaving San Fierro with the yay again, right?

Maybe to stop him, we should lock The Joker in a room with that Candle Jack wacky guy he is. He's a fun poker buddy.

At least we're safe from Candle Jack in The Stinger area.Actually not really. Darn it, I'm out of rope again. >That does it, I'm calling Chuck Norris. Forget Chuck Norris. Someone call Cosgrove. He'll point his finger at Candle Jack and tell him to Or, you know, you could just... stop typing my name. Seriously, people. ...or you could stop kidnapping people instead. Just saying. As if Cosgrove could actually stop me. Trust me, Freakazoid tried, it did not work. I think I still have them in my inventory. It does makes me wonder, why does Candle Jack happen to take so many people along for a ride? I'm a nice guy, it's second nature to me. Now stop saying my name already, I have better stuff to do. Will do, Candle...CRAP! I almost said Jack... oops. Nope. Not doing this shit anymore. You capture yourself. I'm going to the Bahamas. Who would get me first? This guy, or Beetlejuice? Because if you say Beetlejuice three times, Beetlejuice will get you before Candlejack would? Yeah, you keep telling yourself that. Rejoice, friends and comrades! I present you with my new, patent-pending, CANDLE JACK REPELLENT!A repellent that works on me? That's the dumbest thing I've ever heard of. Jack, no swiping! Jack, no swiping! Jack, no- You're too late! They'll never find you now! ...What, don't you watch the show enough? That actually happens every now and then. I can't help but wonder: What would happen if Candlejack said his own name? Well, I can't kidnap myself, so nothing would happen. Candlejack! See? Now come with... Wait, did I just tie myself up? I'm confused! How do you spell his name? Is it Candle Jack or Candlejack? Seriously? You're not even supposed to be saying it in the first place! What is all of this stuff about Candle Jack? I don't even know who he is! Oh, hey. I'm out of rope. Do you have some? Oh, me? Sure! Here you go! Don't spend ithank you very much. Hey Candle Jack, you look like you could use a hug. Thanks, I needed that. It's been a long day. Heh heh heh. Candle Jack will never find me all the way down heYou wanna bet, buddy? I wonder... If I pothole his name... what happens to the further potholes? and is it a working loophafraid not, my friend. And what about "C....e J..k", huh? Will I get kidY.s I work in a tech support and I've just received a complaint from a certain Jack Candle! Is it safe for me they never stop falling for this one. One clever a was that, admit I'll but, too him kidnapped I but, that tried Warp Thymespe Warp Thyme that way the in name Jack's Candle speak I if what. Candle Jack? What is that, an amalgam of HThat's not for you to know. CAPTAIN JACK HARKNESS! GOTCHA Bye. It's close enough for me. He's a good guy. Don't hug him for more than five seconds, though. Wait, how did they cast Candle Jack if Candle Jack would just kidnap all his voice act It's called a casting couch. Jack be nimble Jack be quick Jack jumped over The candlestill expecting some kind of immunity to fire, I guess. I won't complain, he was so busy treating the burns he didn't even notice me. So does this mean that all our Tropers are belong to Candle Jack?@#$, that meme went out of style years ago. I don't want to hear it again. How about if I say Candle Jane? Does that bring up any rule 63 applies to me too, so yes. Candle Jacking off a dEXCUSE ME!? I like the new TV Tropes layout. Candle Jack, WHOOPS, what do you thit's alright, could be better, could be worse. So, if a common crook jacks a candle truck, does that stop me? Nah, it's just a stunt to let me rope you all in. TOP O THE MORNIN TO YA LADDIES MY NAME IS CANDLEJACKSEPTICEYE AND WELCOME TO PHOTOBOOTH! Has no one guessed yet that you should just stop saying his name? What do you think, Candle Jack? I agree. Seriously, I've run out of rope multiple times on this page alone. Does he have a wife named Jill? Nope, still single. Wait, if he can only hear people say his name, why does typing Candle Jack make honestly, just roll with it. Iway etbay ifway eway aysay Andlecay Ackjay inway Igpay Atinlay, aybemay ehay on'tway Orrysay, onay iceday. Hey Candle Jackoff, what's your opinion on LazyTowhttp://air-ride-adventures.wikia.com/wiki/Air_Ride_Adventures_Wiki

Hey Candle Jack? HERE'S A LITTLE LESSON IN NOPE! Not today. Y'know what'd be awesome? Getting Trope-tan to come on over and fight the guy this very page is about. We oughta give her Idiot Ball to the aforementioned guy. Fight of the year, no question. FFFFFFFFFFFFFFFFFFFFFFFFFFFFFFFFUdge and macaroni sounds tasty. Ya know what? I'm going to start a charity. It will go towards buying Candle Jack more rope? Aww, thanks, that's so nice of you! Especially since everyone here's an idiot. What if we called Candle Jack something like Lantern Johnno way. At this rate you're just toying with me. Good thing I have tons of rope from that charity. Jxbv, jrrg qhzv! L'p xvlqj Fdhvdu Flskhuv! Wklv zloo vxuhob shuvxdgh Fdqgoh Mdfn wr nlgqds pruh shrsoh? Vxuh, zkb qrw, hyhubrqh hovh lv lq rq lw, dssduhqwob.

Translation: Guys, good news! I'm using Caesar Ciphers! This will surely persuade Candle Jack to kidnap more people? Sure, why not, everyone else is in on it, apparently.

And even if Ol' Jackie tried to kidnap me for asking that, at least I have my loaded shotgun to scareI stole the shells too.

Statler: You know what I think about these people up there?
Waldorf: What would that be?
Statler: They're all fools.
Waldorf: You're right! Nobody can be so dumb as to say Candle Jack and
Candle Jack: Just so you know, you guys aren't immune either. Do-ho-ho-ho-hoh!

Example of:
Speak of the Devil