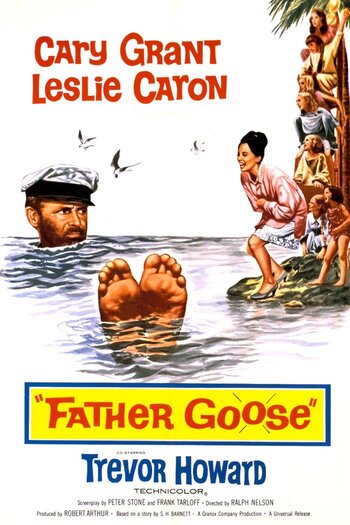 In the South Pacific, Australian Navy Commander Frank Houghton (Trevor Howard) has to "convince"—read: coerce—an old friend, American beachcomber Walter Eckland (Grant), into becoming a coastwatcher for the Allies. Eckland, who is uninterested in anything other than fishing and drinking, is taken to deserted Matalava Island to watch for Japanese planes. To ensure Eckland remains on duty, Houghton's naval vessel "accidentally" hits his boat, leaving a large gaping hole in its hull.

Houghton later finds a replacement watcher who happens to be in distress, but Eckland has to retrieve him from nearby a nearby island. Eckland unexpectedly finds, not the island watchman, but a Frenchwoman by the name of Catherine Freneau (Caron) and seven young schoolgirls under her care stranded there instead. She informs him that the man he came for was killed in an air raid, and Eckland reluctantly takes them back to Matalava with him.

Now having to take care of the prim and proper school teacher and her students, Mr. Eckland tries to maintain his privacy and get the ladies off the island as fast as possible, a task easier said than done.