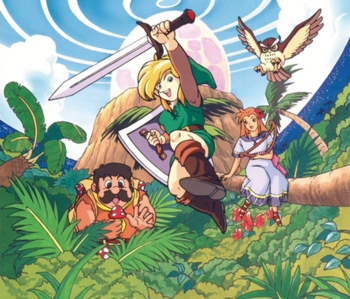 Whenever an adventure far from civilization is needed, a tropical island is where it usually will be set. Typically located in or based on the Caribbean, Oceania or Southeast Asia, tropical islands are a very popular location for adventures due to their exotic environment and wildlife, remoteness and disconnection from the rest of the world, allowing for more fantastic elements than would be seen in a more civilized setting, and being popular places for vacations, due to their usually sunny weather, warm climate and pristine beaches. The protagonist could be there on a vacation, exploring the island due to rumors of treasure or be shipwrecked there and looking for a way off the island. Pirates (of either the classic or modern type) and their loot, dense jungles, coconut trees, carnivorous plantlife, temples, volcanoes, mad scientists, killer tikis and angry cannibalistic Hollywood Natives tend to be common in these settings, and the island can potentially overlap with Deserted Island, Island of Mystery and Isle of Giant Horrors. Caribbean examples can also overlap with Banana Republic and Latin Land if they are Spanish or French-speaking.

Remember that this trope is specifically about TROPICAL islands. Just regular islands do not fit under it.