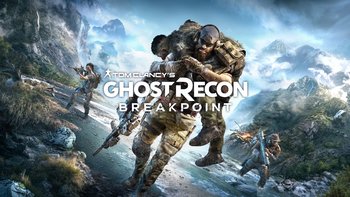 There is no briefing.
Ghost Recon Breakpoint is a game in Ubisoft's Ghost Recon tactical shooter series, and a follow-up to Ghost Recon Wildlands.
Advertisement:

Six years after the events of Wildlands, the Ghosts are dispatched to the fictional Auroa archipelago, the home of Skell Technology, or "Skell Tech", a controversial AI drone and robotics firm whom the Ghosts had crossed paths with before in Bolivia. Skell Tech, along with the entire Auroa archipelago, has mysteriously gone dark soon after a US cargo ship was sunk in the vicinity. Unable to get in contact with company head Jace Skell, the United States government dispatches Ghost Recon to make contact and investigate the circumstances of the sinking. Led by Nomad, Weaver, Holt, and Midas, a formidable force of 32 Ghosts set out to Auroa by helicopter...

...And things go wrong pretty much right off the bat.

Before they even make landfall, the Ghosts are knocked out of the sky by a swarm of drones. Nomad escapes, but Midas is missing, Holt is seriously injured, and Weaver is killed—by none other than Cole Walker, a former Ghost and long-time teammate of Nomad and Midas. After meeting up with a group of survivors known as the "Homesteaders," Nomad discovers that the island has been taken over by Sentinel Corporation, a PMC which was originally hired to protect the island, but has apparently pulled a coup over Skell Tech and is currently ruling Auroa with an iron fist. Nomad teams up with the Homesteaders, along with other island locals and surviving Ghosts from the crash, to bring justice to Walker for his betrayal and stop his plans, but it soon becomes clear that Walker and Sentinel are just the tip of the iceberg on Auroa, and that much more dangerous threats may be lurking, waiting for their chance to strike...

The game was released for Gold and Ultimate Edition owners on October 1, 2019, and three days later for the basic edition owners. It was released worldwide for Microsoft Windows, the Playstation 4 and Microsoft Xbox One. It'll also see a release via Google Stadia.

We are Wolves Trailer

, "What is Breakpoint?" Gameplay Breakdown

IGN also released a video of first 15 minutes of the campaign.