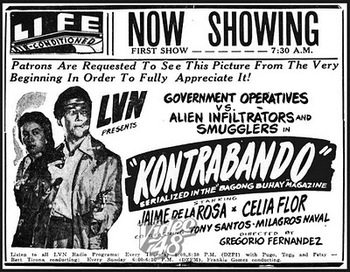 It follows the mission of Diego Malvar or also named Lt. Diego Magtanggol, a military intelligence agent working for the Philippine government—in local terminology, a "G-2 operative", played by 1950s movie star Jaime dela Rosa (brother to the more famous matinee idol and later Philippine Senator/Ambassador Rogelio dela Rosa), as he's tasked with infiltrating a notorious criminal syndicate in the business of narcotics and arms trafficking. He does it rather successfully for the most part.

This piece is a rather heavy-handed piece of government propaganda characteristic of the era it was made in; a time when American political influence hung deep and dark over the newly, but nominally, "independent" Philippine republic, and was constantly convincing its leadership that a Communist threat was constantly hanging over the country, and needed to be stopped at all costs.

The full movie is viewable online on this site.