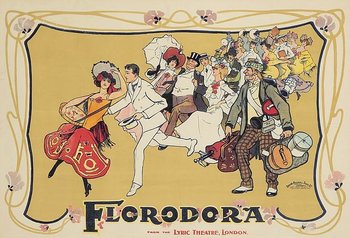 Florodora is an originally British musical comedy that came out toward the very end of The Gay '90s, just before The Edwardian Era commenced. Its book was written by Jimmy Davis using the pseudonym Owen Hall, and most of its music composed by Leslie Stuart. Paul Rubens contributed further songs and helped write lyrics along with Edward Boyd-Jones.

Debuting to great success at the Lyric Theatre in London in November 1899 (it ran 455 times there), it quickly made its way to Broadway, where—at an initial 552 runs at the Casino Theatre—it became the first West End musical to achieve a comparably huge success across the pond as well. Throughout the early 20th century the musical apparently enjoyed enormous popularity, not least because of its would-be famous sextette of dancing "English Girls", who would go on to be immortalised as the "Florodora Girls" on stage and in film—their dance numbers became such a hit among audiences that they came to embody, and even eclipse, the rest of the play in 20th-century pop culture. Today, however, the musical has faded into near-total obscurity, although it returned to London with a brief run at the Finborough Theatre in 2006, and (again across the pond) the Lyric Theatre of San José (California) performed some of the musical numbers in 2009.

Florodora is named for the fictional Philippine island its first act is set on, home to an eponymous tropical flower which in turn is the source of the eponymous, exquisite perfume, the production and sale of which is effectively monopolised by American industrialist and millionaire Cyrus W. Gilfain. Only problem is, the perfume business wasn't originally his to begin with—it belongs by right to Dolores, the local girl on whom he's set his sights for marriage. Also involves, among others, Frank Abercoed, Gilfain's chief clerk and Dolores' Love Interest—who unbeknownst to the others, is now the new Lord Abercoed, heir to a Welsh castle and title but to very little actual wealth; and "Professor" Anthony Tweedlepunch, an investigator undercover as a sort of charlatan stage performer, hypnotist and phrenologist, who sneaks onto the island searching for Florodora's true heir, on the pretext of planning to pair off all the eligible bachelors and bachelorettes on the island based on the shape of their skulls (itself a pretext for Gilfain to consolidate further control over the island, as he intends to have the farm heads—all girls—to wed his clerks—all men).

The second act moves the action from the flowery Philippine island to cold Wales, where Gilfain buys out the Abercoeds' ancestral home and intends to marry off his daughter Angela to (Lord) Frank Abercoed, unaware that his corporate sins are quickly catching up to him. Lots of trilling comic opera songs and show-stopping dance numbers ensue in the midst of a zany plot that generally makes sense from a distance, but has a lot of odd—and questionably necessary—twists and turns.

Ironically, despite having been translated into over a dozen languages and performed throughout much of the Anglophone world, it is very little-known in the Philippines, which forms the entire backdrop of the play's first act. It's safe to say very few Filipinos know of the musical's existence today. (Then again, not much of the rest of the world really remembers it today, either.)

Compare The Sultan of Sulu, another, just-as-obscure, turn-of-the-century musical, but an American one, that came out around the same time (debuting in 1902), and which also takes place on another Philippine island. As the title suggests, that musical revolves around the Sultan of the island kingdom of Sulu (a Real Life part of the Philippine archipelago, as opposed to the fictional Florodora; the Sultan himself is also a Historical Domain Character).