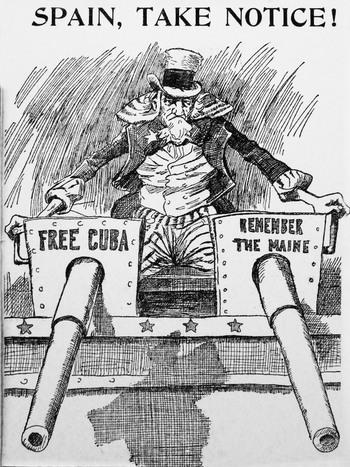 "Remember the Maine, to Hell with Spain!"
"You furnish the pictures, and I'll furnish the war."
— William Randolph Hearst, allegedly and semi-quoted in Citizen Kane
Advertisement:

The Spanish-American War of 1898 was what happened when the United States of America tried to conquer most of the Kingdom Of Spain's colonies, i.e. Cuba and the Philippines but not Spanish Morocco or Spain itself.

Through the mid-to-late 19th century, Cuban nationalism and separatism was on the rise. The result, given Spain's utter reluctance to let the colony go, was inevitably violent. Uprisings were attempted, but they were all crushed with varying degrees of brutality. All, that is, with the exception of the very last one; in 1898, with half the entire island in-revolt, it looked as if Cuba really would gain her independence. In the midst of this process, the USS Maine (an American armored cruiser sent to implicitly threaten Spain with war if they didn't hurry up and give Cuba to the USA) blew up and sank in Havana Harbor. The US quickly seized upon this opportunity to intervene in the war before the rebellion could throw the Spanish out entirely and declare independence, with the US's investigation into the incident implicating the Spanish - who were quite right to have stated that it was a tragic US Navy accident at best (probably due to a coal fire)note  This theory has been vindicated by multiple investigations by the US Navy, from the initial inquiry to an exhaustive one commissioned by Admiral Hyman Rickover in the 1970s using modern analysis of eyewitness accounts and forensic evidence of Maine's salvaged wreckage. The only major point of contention is whether the coal fire was the result of operator error by the crew or an electrical short and a Wounded Gazelle Gambit at worstnote  This view is propagated by the Castro regime with little, if any, supporting evidence.

While US President William McKinley was personally reluctant to make a war of the matter, the US public were baying for Spanish blood and the USA's law-making body - Congress - passed a resolution which effectively forced him to demand that Spain give Cuba 'independence' in very short order. This proposal would mean that the USA would effectively run its government and economy just as it did every other nominally-independent country in Latin America bar Argentina. Or else. Though a far weaker country, the Spaniards were a proud people who quietly hoped that the US would just give up on the idea if they put up a good fight; naturally they refused, and the US declared war upon them.

While Spain's giving up Cuba was the original casus belli, the US ended up demanding the same deal for all of Spain's overseas colonies. The people of Puerto Rico also took the opportunity to demand independence, for instance, as did the peoples of the Philippines - who were already in open revolt, and the US negotiated with the Filipino provisional government-in-exile in Hong Kong, later ferrying their leader, General Emilio Aguinaldo, back to the Philippines to "resume" (more like, again take charge of) their revolution against Spain. US naval power was employed to great effect, though the performance of the US Army, which had been underfunded in the post-Civil War Reconstruction and whose only experience for the past three decades had been assymetrical warfare against the Indians, was hampered by inexperience, hasty training, and inferior equipment - the Spanish troops carried Mauser repeating rifles employing modern ("smokeless") powder, while National Guard and volunteer units in the US Army largely still used Springfield "Trapdoor" single-shot black-powder rifles note  The United States had adopted two modern(ish) bolt-action rifles that used smokeless cartridges, the 6mm Lee Navy (otherwise known as the Remington-Lee) for the Navy and Marines, and the .30-40 Krag-Jorgensen M1895 for the Army, both of which were inferior to the Mauser in different ways. However the US Military received, at best, lackadaisical funding for most of the three decades between the Civil and Span-Am Wars, so actual procurement of these rifles hadn’t gone very far. Krag production picked up dramatically as a result of this conflict, but the Lee Navy remained a Rare Gun, which gave off dark clouds of gunpowder when fired, and the US artillery was equipped with Civil war cannon converted to breechloaders. American and Cuban Revolutionary forces soon worked together to make good use of their numerical superiority over the Spanish loyalist and government forces, however. The infamous Charge at San Juan Hillnote  The Rough Riders actually assaulted adjacent Kettle Hill. San Juan Hill was taken by the Buffalo Soldiers of the 10th Cavalry in a charge led by Black Jack Pershing (in which future US President Theodore Roosevelt first attained national fame) and the Battle of Manila Baynote  It should be noted that the US Navy was praised for its seamanship, but regarded as a laughingstock for its gunnery. The Spanish Royal Navy, however, was even worse. American ships missed most of their shots. Spanish ships seemed to have a hard time hitting the ocean. At Manila Bay, the only American fatality was due to heat stroke, a Curb-Stomp Battle if ever there was one, are good illustrations of the course of the war at large.

Spain soon sued for peace, and a Treaty concluding the war was signed in Paris later in the year of '98. In what was termed domestically as 'the Great Disaster' they ceded Cuba, the Philippines, Guam,note As an aside, Guam surrendered without a fight because an American cruiser showed up off their capitol before they even knew they were at war, and had no ammo to respond to what they thought was a maritime greeting, but was really a warning shot. and Puerto Rico to the United States. It was a blow to the Spanish national psyche and pride, one which gave birth to a wave of Spanish writers called The Generation of '98. It didn't soften the blow much that the US agreed to pay Spain $20 million for seizing the Philippines after the armistice.

Meanwhile, despite McKinley's promise of "benevolent assimilation," the Filipinos felt very left out of all this - the negotiations had been concluded without any reference to them or their representatives - and demanded the same independence terms as Cuba. The US refused and a second, more brutal guerilla war ensued as the Americans clashed with the since re-established Philippine Republicnote Now called the First Philippine Republic, with the current Republic of the Philippines as the fifth, though there were predecessor governments with the same or much the same name headed by the same guy while establishing their own colonial regime over the islands. The Philippine-American War (the older US-centric term is the "Philippine Insurrection") was officially declared to have ended with the collapse of the Philippine Republic in 1902, but there were still hostilities until 1913 due to its remnant military forces and other resistance groups, and these goings-on were officially labeled as "banditry" or "brigandage". Meanwhile, the Muslim Moro peoples of the southern Philippines,note (from the Spanish word for Moor, long since applied by them to the local Muslims) who had never been completely conquered by the Spanish (and had never quite allied with the Philippine Republic, despite the latter claiming to include them), continued to resist American rule as well in what was called the "Moro Rebellion" until 1913. As a whole, the Philippine-American war is estimated to have killed up to 200,000 Filipinos (with some estimates going even higher) and several thousands of American soldiers as well. Many Americans were actually very much against annexing all of these overseas territories, with the most prominent of them forming the Anti-Imperialist League and including the ranks of such figures as Andrew Carnegie, Samuel Gompers, William James, Jane Addams, Grover Cleveland, and Mark Twain.

The conclusion of the war marked a new height of US National Pride and also the zenith of belief in "Manifest Destiny" - the notion that the US was destined to rule over (all of the) Americas by virtue of its... well, innate virtue and (racial-moral) superiority. The USA's ability to project its influence into the Pacific and China; and Latin America; was of course enhanced by its newest conquests, leading to a period of 'imperialism' (in the bad sense) and events such as US involvement in the Qing Empire's 'Boxer Rebellion' and The Banana Wars.

Not to be confused with the Spanish American Wars of Independence