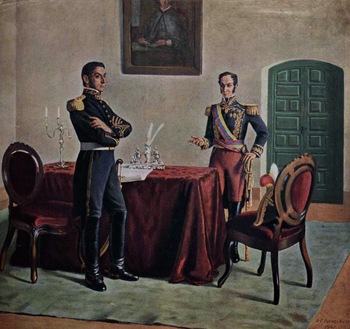 José de San Martín (left) and Simón Bolívar (right), the great "Libertadores" of Latin America.
"To the Army of the Andes it is given the glory of saying: in 24 days we made the campaign, we crossed the highest mountain ranges, concluded the tyrants and give freedom to Chile."
— José de San Martín
Advertisement:

The Spanish American wars of independence took place in Latin America during the early XIX century, and caused the independence of most modern nations in the continent.

The continent had been colonized in the previous centuries by Spain and Portugal. Portugal held a portion of the east of South America (modern Brazil), and Spain colonized the rest; organizing the area in viceroyalties and other subdivisions. The political organization depended from the European monarchies and the rulers appointed by it, and although there was some discontent and rebellions, they were largely kept under control. The problems started during The Napoleonic Wars in Europe, which was largely a conflict between the United Kingdom and France, with Spain allied to France. Napoleon ordered a trade embargo against the UK in Europe, but Portugal defied it and traded with the UK anyway. The Napoleonic armies marched to Portugal, but all the Portuguese monarchy escaped from the country and set residence in the Brazilian colonies. And, as they were already there, they captured the king of Spain, Fernando VII, and appointed Joseph Bonaparte as the new king of Spain. This started the Peninsular War, and new Juntas in the unconquered territories ruled the country as a result, on behalf of the captured king. The alliances were switched: France became an enemy, and the UK turned into an ally of the Spanish resistance.

...and having said that, let's go back to South America. The French aggression never got to the Spanish colonies, but there was a big problem in there: if the king is no longer in charge, what happens with the local authorities that rule as representatives of the king of Spain? Yes, some Spanish people organized a Junta in Spain, but why subject to their authority, instead of doing the same and creating local Juntas? This question was asked all across Spanish America, with multiple rebellions taking place. Some rebellions were successful and seized the local government: this happened in Caracas (Venezuela), New Granada (Colombia), Buenos Aires (Argentina), and Santiago de Chile (Chile). Other rebellions were crushed by the remaining Spanish authorities, and so Central America, Peru, the Upper Peru (Bolivia), the Caribbean and the Philippine Islands remained as Spanish strongholds. Note that in some cases the Juntas were replaced by other forms of government (presidents, triumvirates, supreme directors, etc), but we'll keep calling them "Juntas" for simplicity.

From then on, the wars fully started. It would be hard to keep track of the order of events because it wasn't a conflict between two major powers, but a conflict between several Spanish cities waging war with others. Those who fought for the appointed Spanish authorities were called "Royalists", and those who fought to defend the local juntas were called "Patriots". Patriot forces also fought between themselves: the cities that were the capital cities of a district usually needed to force the cities that used to be subject to it in line, as those wanted autonomy not just from Europe but also locally. For example, Buenos Aires used to be the capital of the Viceroyalty of the Rio de la Plata: Paraguay defeated the military expedition of Manuel Belgrano and declared independence, from both Europe and from Buenos Aires. José Artigas from Montevideo (Uruguay) was a fellow Patriot but wanted a political organization as a Federation, which led to conflicts with the Buenos Aires Junta. There was also a conflict between political ideas: Royalists were conservative, and Patriots were liberal.

Eventually, Napoleon was defeated and Fernando VII was restored to power. He declared all the contries still led by juntas to be rogue states, and sent reinforcements to recover them. The forces of the Venezuelan Simón Bolívar were crushed and he had to take refuge in Jamaica, and Chile was recaptured with the disaster of Rancagua, Only Buenos Aires and its close areas of influence were still free. The Congress of Tucuman declared independence, but it was to little avail, the hours of the revolution were numbered.

Or so it seemed.

José de San Martín, a seasoned military leader from the Peninsular War who had returned to Buenos Aires, declined the attempts to make a third ill-fated campaign to the Upper Peru, and settled instead in Mendoza, training a big army with the local people, any reinforcements he could get from Buenos Aires and the soldiers that escaped from the disaster of Rancagua (including Bernardo O'Higgins). With this army he crossed the Andes, one of the highest mountain ranges in the world, and liberated Chile once again. Bolívar also started a new army and made a similar move, crossing the Andes to liberate New Granada instead of trying to retake Caracas. The campaign was also a success, and seized control of the wealthy Bogota. Spain was preparing a new military expedition, but it never left the country thanks to a local rebellion by Rafael Riego. San Martín organized a navy in Chile and sailed to Peru by sea; the military switched sides when he arrived and Lima was captured without violence. San Martín and Bolívar met in Guayaquil, where San Martín resigned and transferred his army to Bolivar. With the liberation of the Upper Peru (named "Bolivia" as an homage to Bolívar), the war was finally over.

As for Brazil, things were more simple. As the monarchy was living in Brazil and Portugal seemed to be lost, all the Portuguese territories were combined into the single "United Kingdom of Portugal, Brazil and the Algarves". When Portugal was freed from Napoleonic forces the monarchy returned to it, but Dom Pedro remained in Brazil, which became the Empire of Brazil under his rule.

Note that, although the war of independence ends by this point, several local civil wars continued to take place in the continent during the XIX century.