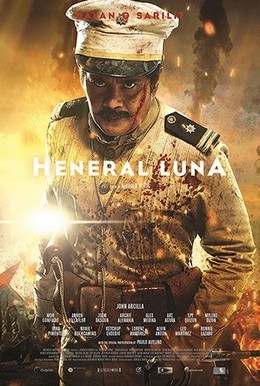 Heneral Luna, released September 9, 2015, is a historical biopic film depicting General Antonio Luna (John Arcilla) and his exploits while leading the Philippine Revolutionary Army against the United States during the Philippine-American War.

The trailer can be viewed here.

with the same cast and crew, Goyo: Ang Batang Heneral (Goyo: The Boy General) about Luna's contemporary General Gregorio del Pilar was released in 2018. A third film about Manuel Quezon, President of the later Philippine Commonwealth is also planned. Both men appear here in small roles. Tarrog also did a short film, Angelito

, which takes place in between Luna and Goyo. As of 2020, the full film is officially free to watch

Compare Amigo, which is set roughly around the same time, in the same war, but doesn't directly deal with Real Life personalities. It instead depicts a more generalized flashpoint of the Philippine-American War, set in a fictional village.