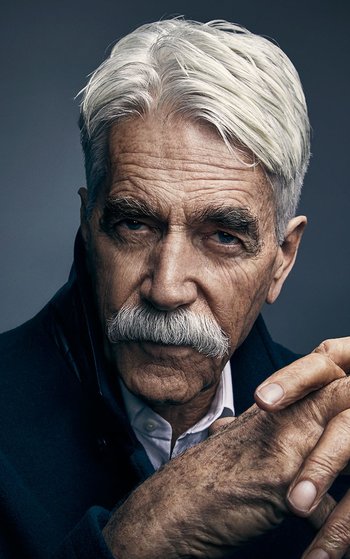 "I think anytime you can affect people in general, in a positive way, then you're a lucky individual."
Advertisement:

Samuel Pack Elliott (born August 9, 1944 in Sacramento, California) is an American actor. He's something of a living legend and is instantly recognizable due to his incredible moustache, bass-baritone voice and Western drawl. He frequently plays cowboys, ranchers and other Southern types. Basically the go-to guy for Cool Old Guy and Badass Baritone. You don't get much manlier than Sam Elliott.

Oh — and though Robert Mitchum did it first, Elliot's is the voice you think of when you remember the "Beef... it's what's for dinner" commercials.

Elliott has one son with his wife, Katherine Ross (Elaine in The Graduate), who he's been married to for 35 years.note This gets even more impressive as Ross had four previous marriages that only lasted a couple years at most.