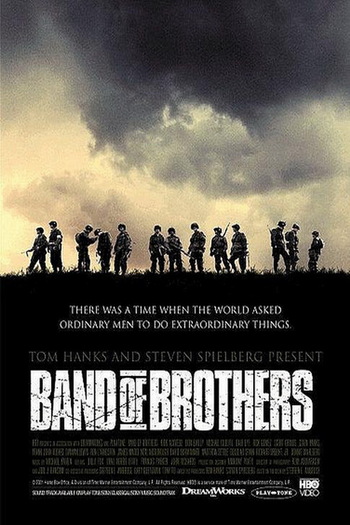 "'I cherish the memories of a question my grandson asked me the other day when he said, Grandpa, were you a hero in the war?' [I] said 'No... but I served in a company of heroes...'"
— Sergeant Mike Ranney
Advertisement:

Band of Brothers is a 2001 mini-series, initially aired on HBO in ten one-hour episodes. It follows the men of Easy Company, 506th regiment of the American 101st Airborne Division. Starting with their training in 1942 to the end of World War II, it follows the same unit through D-Day, the battle of Carentan, Operation Market Garden, the Battle of the Bulge, the discovery of the Concentration Camps, the capture of Hitler's Eagle's Nest and finally the end of the war. Band of Brothers is almost universally acclaimed for its (often painfully) accurate recreation of war, and for examining the relationships between soldiers in an elite, all-volunteer unit. Just about every part of the series is spot on, and the actors look very much like the men they portray.

Some of the primary characters of the series are Major Dick Winters (Damian Lewis), the unflappable leader, Carwood Lipton (Donnie Wahlberg), who steps in to hold the unit together during the Battle of the Bulge, and Captain Lewis Nixon (Ron Livingston), the sardonic and alcoholic intelligence officer.

Now has a character page for its Loads and Loads of Characters.

Since Band of Brothers is mostly based on historical and personal recollections of these soldiers, almost all of the tropes below are automatically an example of Truth in Television.

A Pacific Front version of this series, called The Pacific premiered in March 2010. The 2013 German miniseries Unsere Mütter, unsere Väter is similar, focusing on the Eastern Front, in addition to wartime civilian life in Berlin and the resistance in Poland. And Apple TV+ is creating a miniseries based on the Eighth Air Force, called Masters of the Air.

Other members of the cast include David Schwimmer as Capt. Sobel (the original commander of Easy Company), James Madio as Perconte, and Colin Hanks as Lt. Jones. Possibly more remarkable are the succession of pre-star actors that appear in bit parts: Simon Pegg, Michael Fassbender, James McAvoy, Tom Hardy, and Andrew Scott.

Note: This is about the miniseries. For the trope, see Band of Brothers.

Examples of tropes found in this miniseries:

"And there is not a day that goes by, that I do not think of the men I served with, who never got to enjoy the world without war."
— Major Richard Winters
Feedback