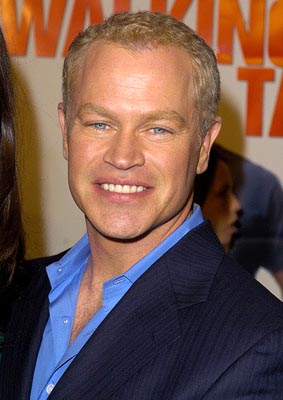 "Looks like an albino deer."
"He looks like he even shits blonde."
"He looked like a husky! Sled dog? It was the eyes."
— A list of phrases used on Justified to describe a character played by Neal McDonough.
Advertisement:

With the sharp blue eyes of a husky and hair so blond it would make Hitler have to sit down and fan himself, McDonough is extremely prolific and has played everything from warm father figures to cold-blooded villains. And he always looks like he's having a ball doing it.

Perhaps his best known roles are that of Lieutenant Lynn "Buck" Compton in the HBO miniseries Band of Brothers, Dave Williams on ABC's Desperate Housewives (2008–2009), Robert Quarles on Justified and his roles in films such as Walking Tall (2004) where he played the Big Bad and Captain America: The First Avenger where he played Dum-Dum Dugan. He's currently playing DC Comics villain Damien Darhk in the Arrowverse.