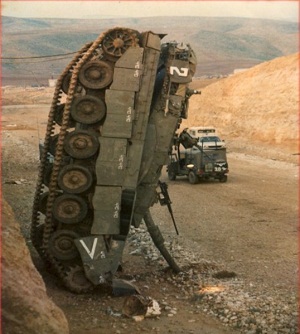 Told you we shoulda made that left at Albuquerque!note Due to Merkavas having their engines in the front, right behind the very massive glacis armor, they are very nose-heavy.
"What it does to a tank" is apparently the standard unit of damage.
— Alt Text, Grrl Power
Advertisement:

Main Battle Tanks are a crucial part of modern armed forces. They combine the mobility and speed of motor-vehicles with the killing-power of artillery, and can also help infantry assault entrenched defensive positions. Modern tanks are all but invulnerable to the crude and improvised weapons used by most partisans and rebels, making them invaluable in the extermination of such groups. All in all, a properly-used and handled tank of a sufficiently modern model can be a formidable weapon.

However, this is not true in fiction. Tanks will be destroyed right and left by the Humongous Mecha or Monster of the Week, with their firepower doing little to no damage. Essentially Red Shirt for armored vehicles, this is where a normally effective force of tanks serves as nothing but cannon fodder to make the enemy look intimidating.

Note that this does not involve tanks getting destroyed in the normal course of warfare. This is when tanks are completely useless for any purpose other than getting blown up for dramatic effect, even when you'd normally expect them to be effective. A tank column getting wiped out by the enemy through good tactics and properly placed weaponry is not this trope. An entire company of tanks firing at the enemy and doing no damage at all, followed by getting destroyed in one shot is this trope. This is about tanks themselves being useless, not just incompetent leadership. Also bear in mind that this can even apply in situations where the tank's introduction makes it rather badass, i.e. mowing down a squad of soldiers or weaker vehicles before being blown away by the real threat. In those cases, the swift destruction of something that was until recently kicking ass and taking names can serve to make it clear that this new threat is nothing to be taken lightly.

In Real Life, tanks have been designed for two purposes: winning battles, and winning campaigns. NATO and the USA specifically designed tanks for the former purpose, and the USSR and Warsaw Pact designed their tanks for the latter. More specifically NATO focused on fielding high-maintenance nigh-invulnerable tanks that could beat WP tanks in set-piece tank duels and hold the line due to their numerical inferiority, whereas the WP focused on fielding cheap tanks with good reliability and fuel-efficiency that could go long distances at high speed across rough terrain and defeat NATO logistics personnel in hit-and-run engagements, as well as flank, while not losing too much if a single vehicle was destroyed, since they have numerical superiority.note This is not to say that NATO weren't prepared to use tanks to attack an enemy's supply lines, or that the WP wouldn't have used tanks to help assault defenses or fight enemy tanks, but these were not the primary roles each respective force had in mind for them.

What this works out to on the field is tanks fighting while or inbetween speeding along with other vehicles, and tanks fighting while crawling alongside infantry on foot. Despite their higher costs, even NATO tanks are very vulnerable to (handheld) anti-tank weaponry in the latter role. Indeed, despite what we said about 'being nigh-invulnerable against ill-equipped opponents' urban warfare tends to expose the weak top- and rear-armor of tanks to potentially lethal attacks and ambushes by infantry at short ranges. Good tank commanders always know how to balance the need to avoid losses and their need to accomplish their immediate objectives - losses are inevitable, but they will never be wasted.

But in many Kaiju series, tanks are very poorly commanded and used. Tanks will be shown to line up directly in front of the monster and get stomped, despite the fact that modern battle tanks can reliably hit small-ish targets many kilometres away (and even over the horizon). Additionally, despite most militaries carrying ammunition designed to penetrate the thick armor plating of other tanks and defensive fortifications, they will never be able to cause even superficial wounds to the monster.

Even in more "realistically" based Humongous Mecha shows, the mecha can destroy tanks with ease despite being larger targets and not having any heavier weapons or armor than battle tanks. In fact, these reasons are why most militaries consider the idea of Humongous Mecha to be impractical to begin with. This can be justified if there is an extreme technological gap between the combatants. Usually, conventional tanks would have about the same problems with any Impossibly Graceful Giant war machine as they do with their old nemesis the ground attack aircraft, but in a practical situation the technology enabling that grace would be applied to the tanks first. Tanks could be said to be the Red Shirt counterpart to the Mecha-Mooks of the enemies.

In superhero series, tanks are never any threat to superheroes, usually only serving as an impromptu missile, getting swung at another tank, or flipped upside down. This can be justified if all the characters have Super Toughness in addition to Super Strength (as is usually the case), but you'd still think the military would learn their lesson after a while.

When tanks are not useless, and are, in fact, quite awesome, then it's Tank Goodness. If the things being destroyed are called "tanks" but aren't or the depiction of tanks is incorrect, then it's Tanks, but No Tanks. A Sub-Trope of Armor Is Useless. Compare The Worf Effect, Red Shirt, and Five Rounds Rapid. Contrast Mecha-Mooks, when it's the Humongous Mecha that are getting crushed. For the helicopter version of this trope, see Hellish Copter.

Kenshiro meets a functional tank in a post-apocalyptic world. The tank doesn't even scratch him while Kenshiro blows up the tank with his bare fists.

Kenshiro meets a functional tank in a post-apocalyptic world. The tank doesn't even scratch him while Kenshiro blows up the tank with his bare fists.