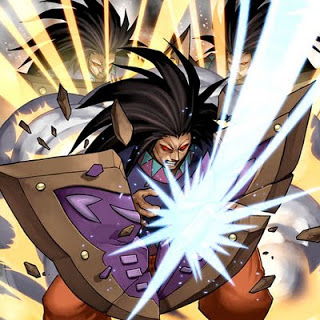 "If I were to pick up this cowering-plate, I would have to put down my second sword," a Scotsman thinks. "And surely this is madness."
— Team Fortress 2 (on the Chargin' Targe)
Advertisement:

Shields. Big pieces of wood, animal hide, and/or metal that protect at least one half of your body against attack. Pretty useful in battle, you might think. And indeed some characters will gratefully sigh that Luckily, My Shield Will Protect Me. Others, however, are not so sure. This trope applies whenever shields are shown to have a negligible effect in combat, or are treated as an unnecessary encumberance.

The use of a shield in combination with one's choice of spear, sword, axe, etc. been enduringly popular throughout the history of hand-to-hand fighting because it works, especially if you haven't got a lot of armor and also need to protect against arrows or thrown projectiles. Just because it's practical doesn't necessarily mean it's entertaining, though. Storytellers prefer to give a Hero a more flashy or exotic fighting style, often a two-handed weapon such as a BFS, and sometimes even two swords at once. According to The Law of Diminishing Defensive Effort, this means he's either tough enough or skilled enough that he doesn't need a shield. Even if a hero begins the fight scene with a shield and uses it to block some hits—something often required in a Sword and Sandal epic where shields are just too iconic of the period not to include—he'll take minor damage to the shield as an excuse to throw it away, and then he won't go looking for a new one. Furthermore, discarding a perfectly good shield before charging a villain can be a sign of reckless bravery or determination to fight seriously, getting rid of the protective but encumbering object in order to move more quickly and strike powerful, two-handed blows.

In the hands of the Red Shirt Army or a villain's mooks, shields are little more than a part of their costume. They will rarely form a proper shield wall or use proper guard technique, often letting it hang limp at their side or swinging it behind them each time they strike a blow with their weapon. They may or may not be smart enough to try a Shield Bash. Their shields also seem to be made of cheap crap, since a major character's Absurdly Sharp Blade can cut through them like wet tissue paper, and they'll disintegrate if you give them a strong kick.

The fact that fiction doesn't quite know what to do with shields may have to do with there being fewer historical sources (especially European ones) describing how to use them, and the fact that they weren't included in the classical fencing tradition which inspired Hollywood Flynning. There are other problems too. Matt Easton (Schola Gladiatoria) notes that it's more difficult to train actors to use a weapon and shield at the same time compared to just a weapon, and that large shields have an annoying tendency to block line of sight while a fight is being filmed. Furthermore, decades or even centuries of The Coconut Effect have gotten audiences to consider the crossing of blades to be the most exciting aspect of a sword fight, and the fact that shield fighting reduces the frequency of blade-on-blade contact risks making it look confusing or boring to them. For these reasons, it may be tempting to portray shields as useless so that the main characters (and by extension, their actors) have an in-universe justification not to use them.

To be fair, in most fantasy or fantastic settings, a shield is indeed of a much more limited use than in real life, pretty much for the same reason shields are not widely used in warfare in real life today: lots of dangers that are too fast, accurate, or powerful to deflect them with a hand-held piece of something hard. Be it a sniper (with a bow or rifle, no matter), a mage who can just unleash fire, cold and lightning (wish you could buy a rubber-coated shield, perhaps?), or the massive impact from a dragon's tail or a giant's club, dangers of truly heroic scale would take much more than a shield to defend against.

Closely related to Armor Is Useless and Helmets Are Hardly Heroic. Not to be confused with Deflector Shields. Contrast Luckily, My Shield Will Protect Me, Barrier Warrior. Compare and contrast Throwing Your Shield Always Works — it shows there's something you can do with them, but rather relies on the belief that there's no particular use in holding onto it.