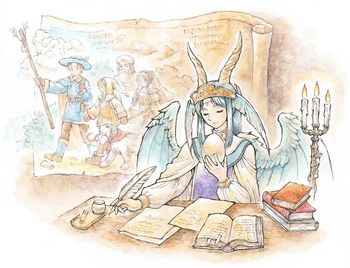 It begins in a large forest, with tree-covered mountains, and hills sprawling as far as the eye can see. A group of four is seen walking down the side of a cliff with an Ox pulling a cart full of supplies. Suddenly one of them, a young boy in overalls, falls off the trail and rolls down a hill. While trying to pick himself up, he realizes his knee is causing him some pain.

One of the travelers, an older woman in a white cloak, races after him, checking on his condition. However, it seems the boy’s cries have alerted a small group of wolves, who look rather angry that the group has crossed into the wolves' territory. Seeing this, a scholarly-looking man pulls out a tome from his backpack and a hardened woman with leather belts pulls out her sword, rushing to the front to stop the pack from harming the rest of the party.

But the question is, how will this story end?

Ryuutama is a Japanese Tabletop Roleplaying Game created as a response to the Dungeons & Dragons boom once the game hit the region. Also referred to as "The Natural Fantasy RPG", the game has a heavy focus on travel, character conditions, friendship, and adventure. Most experience that characters receive isn’t about taking down monsters, but for getting across harsh terrain and finding new towns and locations. Classes are also not just Barbarians, Paladins and Thieves, they are Merchants, Healers, and Nobles who travel together with a similar goal in mind.

Because of this, as well as the gamebook's art style, many Tabletop fans would call Ryuutama "Hayao Miyazaki's The Oregon Trail."

Of course, that’s not the only thing you can do with this game. Probably the most well-known mechanic of this game is the inclusion of a required GMPC known as a Ryuujin, a race of demigod dragons who are tasked to bring stories of commoners to a greater dragon and feed it these tales until they are ready to leave. The more stories the Ryuujin gather, the more powerful their dragon becomes, and said Ryuujin gains benefits from being in multiple campaigns by gaining more abilities. Each Ryuujin type has their own powers, abilities, and story types they excel at. If your story is a very simple yet long trip across the nation, use the green Ryuujin, or if your story is about a brewing war on the verge of ignition, use the red Ryuujin.

The game never received an English translation for a while after its original Japanese release, until 2014 where a team started a Kickstarter to fund a translation of the book. Official PDF and Physical copies were released in 2015.

Tropes for the Game Include: