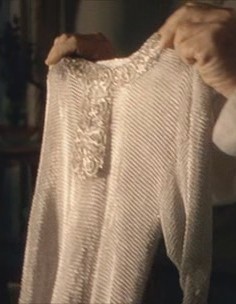 "As light as a feather, yet as hard as dragon scales."
"Mithril! All folk desired it. It could be beaten like copper, and polished like glass; and the Dwarves could make of it a metal, light and yet harder than tempered steel. Its beauty was like to that of common silver, but the beauty of mithril did not tarnish or grow dim."
— Gandalf, The Lord of the Rings, Book II, Chapter 4 "A Journey in the Dark".
Advertisement:

Mithril is a fictional metal from J. R. R. Tolkien's Middle-earth fantasy writings. It's silvery and stronger than steel but much lighter in weight. The author first wrote of it in The Lord of the Rings, and it was retconned into the second, revised edition of The Hobbit in 1966. In the first 1937 edition, the mail shirt given to Bilbo was described as being made of "silvered steel".

The name "mithril" or similarly spelled variations (mithral, mythril, mythral, and others) is present in other fictional contexts like role-playing games, since the term is not trademarked, unlike "Hobbit" or "Balrog". The name is usually used for a special type of metal (often used as armor), or as a denomination of currency, or as a name for a project or device. It's very useful to have an exotic trope metal that is more rare and valuable than mundane metals like steel or gold. Citadel Miniatures even produced a color of (metallic) paint named Mithril Silver.

As to whether Mithril was ever based on a real metal, Tolkien never said. Guesses for this metal have been aluminum, titanium, naturally occurring titanium-molybdenum alloy and platinum (and yttrium silver if you want to get technical

). Titanium comes closest in lightness, hardness, toughness and resistance to tarnishing, yet it is not found whole in nature, it has to be extracted from minerals via a complex process which could not be discovered and put in practice by a pre-industrial civilization. (Unless, perhaps, if they had magic....)

Not to be confused with Heavy Mithril, or the fictional mercenary organization of the same name.