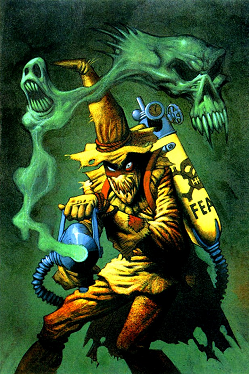 "This stuff has a name that's as long as your arm. It was developed by the military during one of our more contemptible wars. It concentrates a powerful stimulant to a section of the right hemisphere of your brain. A strong dose and you die of fright in fifteen seconds. A light dose, like this, and you spend twenty or thirty minutes reliving your least favorite nightmare."
— Batman, Batman: The Dark Knight Returns
Advertisement:

It has often been said that fear is the best weapon. So this is an ability that induces fear on people.

The person who has this may be psychic and can alter your emotional state. Maybe he's got magic powers that can do the same. Maybe he gives off a pheromone that attacks the amygdala and induces terror. Maybe there is no obvious explanation. However he does it, it isn't naturalnote well, pheromones are natural, but using a chemical to directly induce a state of fear still bypasses the brain's normal criteria for deciding whether or not to be afraid of something, and now anybody who wants to fight him will have to do so while struggling to avoid wetting their pants.

This tends to be a villainous power for obvious reasons. Having your hero stand up to someone who can literally transform his enemies into Dirty Cowards makes for good drama. Many of those who possess it will, accordingly, be sadists of one stripe or another, reveling in the terror they cause. It isn't impossible, though, for a hero to harness this power to a better purpose, scaring off people they might otherwise have to hurt. Regardless of the side they're on, characters with this sort of control over the fears of others are unlikely to be mentally well-adjusted.

This kind of ability can also appear in inanimate objects, particularly Artifacts of Doom, and if anyone uses it, they can induce fear on others with it. (But it leads to a Fridge Logic: How could the user themselves not be affected? There might be reasons to Hand Wave it.)

Compare/contrast The Dreaded, who scares you with his reputation. For characters who use a person's pre-existing fears against them, see I Know What You Fear. A hero who uses this power is a Terror Hero. Compare Empathic Shapeshifter (beings who transform as a response to another's emotions) and Killing Intent (which may cause fear and thrilling effect). Subtrope of Emotion Bomb.